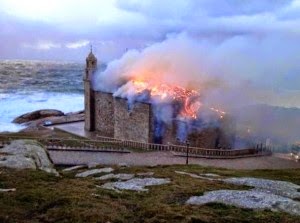 (Madrid) On Christmas Day, the 25 December 2013 the Sanctuary of the Marian Shrine Virxe da Barca was burned down in the far west of Spain.  With tears in their eyes believers are lamenting "winner!" for the restoration of their Marienkirche   (Faro de Vigo) was carried out.
The Marian Shrine is located on the Costa da Morte, the Galician coast of death, which is surrounded by the Atlantic Ocean. During a storm a lightening bolt hit the church of the Nativity of Jesus Christ.
For many, the Santiago de Compostela pilgrimage church is yet another step to Finis terrae to achieve and the Atlantic Ocean. The pilgrimage church dates back to the 11th century. Marian devotion there is of still an older date, which is why Muxia is considered one of the "oldest and most important pilgrimage sites in Galicia". 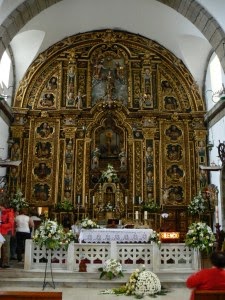 High altar before  the fire

Where the Mother of God appeared to the Apostle James

According to popular piety, the Mother of God appeared to the Apostle James  here. The apostle had retired here at the extreme end of the known world to pray. He had fallen into deep sadness because of the people who did not want to put away their paganism. It was then he had discovered a boat in the distance in the sea which came closer and closer. Finally he managed to recognize the Virgin Mary, who brought him comfort and straightened him to continue his missionary work. Hence the name "Virgin of the Boat."
It was the Benedictine monks of the former,  nearby Abbey of San Julián de Moraime and the pilgrims who built the Mother of God, the present church. The miraculous image of the Virgin is attributed to the 15th century. By 1700 the sanctuary was in the Baroque style.

The destruction
Now believers are complaining about the new "look" that has appeared in the church after the fire. They did so most recently, loudly at the Vicar General of the Archdiocese of Santiago de Compostela, Maroño Victor.  The repair cost around 740,000 euros. Mayor Felix Porto, himself a critic of the restoration, could hardly calm tempers.
The faithful do not like the new "sobriety". Popular piety shows other needs. The magnificent high altar, built in 1717 by Miguel de Romay  in the style of the Spanish Baroque was completely destroyed by fire. Some side altars were partly saved. The miraculous image also remained  intact, which is shown only on feast days in solemn procession, while there was a replica on the high altar.
The Blessed Mother was visited throughout the centuries by countless women who want children.

Church Crisis With Iconoclasm in Train?

The statue
Just a month before the fire rennovations had been completed. They had become necessary for structural reasons. In particularly stormy seas waves   directly wash upon the sanctuary. Recently, this happened in 2005, a few days after the fire.The salt water had attacked the bearing masonry as it was then reported.
Opinions differ about "sobriety", not only since the Calvinist iconoclasm of the 16th century. Iconoclastic relapses took place in the East in the 8th / 9th Centuries, which are interpreted as a response to the ban on images in Islam. Popular piety also differs from people to people. What is too much for one already, may be too little for others.  The Church respects these expressions of different people's souls.
A Calvinist / Baptist contempt of images has also won the upper hand in some diocese and monasteries of the German-speaking world. Required Restorations are a popular gate of entry to present the faithful with the surprising "sober" facts.  The art and cultural critic, Francesco Colafemmina who examined the phenomenon seen in the modern emptying of Churches, sees a metaphor for  inner emptiness and thus an expression of the current crisis of faith and Church.

"Our Lady does not deserve this"

The ancient glass windows remained
"Our Lady does not deserve this." The believers said this and much more to the Vicar General and the architects who had come with him to Muxia. Mayor Porto finally made himself the mouthpiece of the population: "What we want is a high altar, which is worthy for Our Mother of the Boat." Pastor Manuel Linero "suffers the most," under the new situation, the mayor said. He, too, was not included in the renovation project.
The Sanctuary of the Virgin Mother of God "belongs to the Church, but it also belongs to every house in Muxia and every single person here," said the mayor. Generation after generation of inhabitants of Muxia and thousands of pilgrims have supported the church through the centuries with their donations and foundations. This must be respected, says Felix Porto.
Text: Giuseppe Nardi
image: Wikicommons / Diario galego / Luisde-Panoramio
Trans: Tancred vekron99@hotmail.com
Link to Katholisches...
AMDG

I am against wreckovation, but in this instance, there was a disaster and the diocese no doubt had only so much to spend. Let them raise money from pilgrims and whoever else wants to contribute to replace the new diocesan-provided furniture, which should be considered temporary expedients, with furnishing more suitable to honor Our Blessed Mother.

Just a thought: maybe a Protestant, and, it must be said, maybe even more so, neo-Catholic motivation for no Church art is the expense of producing good and holy art, the cost of which could go into pockets other than an artisan's. There is always the person that would rather be seen in an expensive car, house, clothes, etc., than contribute to allow others to see expensive art in a church.

Are you an area expert? Cigona, who is, and the local people including the mayor, who are, consider this to be an insult to popular piety.

Not trying to be an expert. Just saying they are going to have to raise the funds themselves, evidently. That goes for any pious parish from Venice CA to Vienna Austria. Dioceses have trendier causes to fund.

That is, they shouldn't have asked their bishop to begin with. Did they think the modernist archbishop would start displaying some piety?

I think the local ordinary is more concerned with imposing a modernist aesthetic then he is about the souls of his laity.

Personally, I think the next logical step is driving the bishop out of town.

And how do we do that?....and I'm asking that out of all sincerity, as I'm sure our brothers and sisters in Chile would also like to know (if not the faithful in Chicago and San Diego too). We're not far off of a francis appointment here in the Arlington diocese of Virginia, as Bp. Loverde hits 75 this year. I'm trembling in my shoes at the thought of what francis unleashed here will do. This is still a great bastion of orthodoxy and beautiful liturgy (a TLM within 5 miles of nearly any point on any given Sunday). I tremble at the thought of a cupich or a mcelroy here....Oh God, please let it not come to pass.

Loverde is just as bad as Francis.

I've got my own problems with Loverde, but he actually got better over time....I think the immensity of responsibility hit him. Let's just say that he didn't destroy all the good in the Arlington Diocese, and I greatly fear that a francis appointment would do just that.

Here's a solid conversation piece, Tancred. Garry Wills, in a NYR piece, hits the nail on the head about the discordance in Catholic attitudes towards Pope Francis. It is relevant to many of those on this site who express deep resentment and hostility towards the Pope.


"At a recent I talk I gave about Pope Francis, a man asked me, “Why do more non-Catholics like the pope than Catholics do?” He was wrong, of course. A Pew poll two months ago found that 90 percent of Catholics like what the pope is doing—and the number is even higher (95 percent) among the most observant, Mass attending Catholics. The percentage of non-Catholics who view the pope favorably does not get above the 70s.

Yet the question was understandable. There is a perception of great resistance to the pope in his own church. This is largely the product of noise. Extremists get more press coverage than blander types, and some Catholic bloggers have suggested that the pope is not truly Catholic. They are right to be in a panic. They are not used to having a pope who is a Christian."

there's everything you need to know.

Read what he has to say instead of coming out with this knee jerk teenage reactiveness.

"paul krugman of the NYT says the Blessed Mother is neither blessed nor a mother, and 103% of catholics agree!"

I don't think Gary Wills was ever a sincere Catholic. Maybe when he was 9.

As far as I can determine, Wills is a very committed Catholic and is a daily Mass goer.

As far as you can tell... Anyone who shares your views is Catholic.

Garry Wills?!?!?!?!?!?!?!?! The barking seal pf progressivism? Is he still alive? What was that book he wrote on Catholicism about 25 years with his 1960s lefty trendy point of departure? Wasn't he the older, syndicated version of house Catholics like Maureen Dowd? He's gayer than you, Gaybriel! (I don't mean in the homosexual sense, but the usage of high school kids today: bizarre and lame at the same time.) He, like so many others, never had the intellectual honesty to leave the Church. You can stay, Gaybriel, if you promise to behave, do your lessons, and wash behind the ears. :)

But as I reflect on it, maybe even 30 years ago.

Instead of writing Wills off with the lazy dismissive swats, why don't you actually check on the man's background, standing in the Church and Faith practice.

While you're running off at the mouth with this litany of inanities, you might ponder why it is that if I were to play endlessly on your connection with the Circus, I would be deleted yet again.

I think deep down, Barnum, you get a panic attack of the stercs whenever I post.

Huh? What? What was inane? Show me one inanity. Why don't you actually tell us what a faithful Catholic is. At least your idea.

Two can play that game, eh?

And at least I don't defend clown Masses, Gabriel, :0

Pope Francis is a faithful Catholic. Why do you resent him so much?

That was the early 60's, wasn't it? I quit subscribing to NR when they smeared, jeered, and cashiered Joe Sobran and Pat Buchanan. Tossed to the lions, you can say.

Wills used to be a syndicated columnist, maybe he still is. Though I can't recall any column in particular, I just seem to be left with the impression that he left a faint odor of relativism whenever he wrote. Wills strikes me as another liberal holier-than-the Pope liberal that is always telling the Pope and the Church where they, the Pope and the Magisterium are wrong. Such knowledge can only be of Holy Spirit, so he himself must have a Special Connection to God. At least to the Zeitgeist.

Wow, Gaybriel really squealed like a monkey who had hi s banana taken away. You don't suppose HE is Garry Wills, do you?