A Requiem For a Monarchy

Edit: it wasn't Sarum though! It's not the end of the world, but one of the occasional commenters has suggested that the Franciscans who originally buried Richard, would have used the Roman Missal. Perhaps Richard would have been more involved in Liturgy if the choice were left to him, and we balk a bit at Father Simon's suggestion that concern for the Sarum Rite is also a vote for a hobby like historical renacticism, but it sounds like this was a wonderful and holy event attended by the local people, many of whom weren't Catholic, and got to see the Mass of All Ages, celebrating one of England's mighty Scions.

[Offerimus Tibi] Thought I'd post some photos of Mass last night - our Requiem for King Richard III. There was a great turnout, with people coming from across the Pennines in Yorkshire, local folk who had heard about it but were not Catholics and members of the Richard III Society, as well as LMS members and parishioners. After Mass - with full Umph! from organist David-Scott-Thomas - we all thoroughly enjoyed singing a rousing rendition of Jerusalem! Followed by a themed buffet with such tasty morsels as Yorkshire pudding with venison sausage or duck in port sauce, Pye of pork meat made with paest royall, Ribbes of beef, Quail eggs and roasted chicken calf. So together with Traditional Latin Mass and good food and wine, we felt that we gave King Richard a properly Catholic send off. This was rather the point of the exercise, as my own stand is that wherever he was re-interred, it should really have been in a Catholic setting. He lived as a Catholic (including whatever sins he may - or may not have committed) he died as a Catholic and was exhumed from a Catholic burial site. 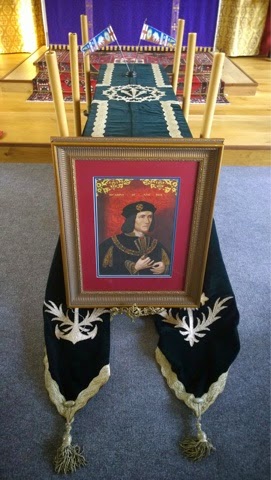 1) From the news articles I read, I had the impression he was buried on or near the battlefield. Was he actually buried in a Franciscan monastery? I can see where the English press wouldn't want to report such.
2) Why was "Jerusalem" played in a Catholic Church? That is an obvious and militant Protestant song, and I think even proto-New Age, in the sense that Mormonism is proto-New Age. The music is beautiful, but I find it hard to believe a 15th-century Christian like Richard would have been enamored of the ideas in the lyrics.

He was buried at Greyfriars.

I can't vouch for playing Jerusalem.

Thanks, Tancred, I don't remember seeing that in the English accounts. They wouldn't want to report that a King was buried in stolen property, I suppose. They might not have even realized the property was stolen.

Blake is obviously a much better poet than the lyricist of "On Eagles' Wings," but there are some songs dragged into our liturgies that simply don't have Catholic theme or intent, the musical equivalents of, say, the words Mormons use in their baptism rite.

Blake was a horrid anarchist, but the song does bring a tear to the patriot's eye.