France: Marian Statue Must be Removed --- It "Violates" the Separation of Church and State 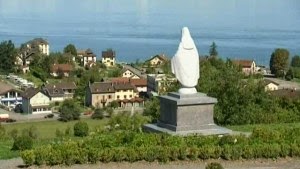 Publier: statue of Mary on Lake Geneva
(Paris) In 2011 a statue was built in a park of the French community Publier dedicated to Our Lady of Léman (near Lake Geneva). High up on a slope  the statue has since looked down on Lake Geneva.  Now was the Administrative Court of Grenoble, says the statue of Mary "violates secularism". It has stood  on public land in France since 1905, but  strict "separation of state and the Catholic Church" has rules. And because this is so, the statue has to be "removed". According to the Administrative Court, the local government should never have to issued a permit for the erection of the statue.

France's Don Camillo and Peppone Could Erect Statue of Mary

Publier is a town with 6,500 inhabitants. The town is located on the south shore about 120 meters above Lake Geneva in the midst of a wine region. With a wonderful location, the sunny-mild climate and suitable infrastructure,  Publier has grown rapidly during the past decades. In 1962, the municipality  had only 1,871 inhabitants.
Amazingly, Mayor Gaston Lacroix, a non-party leftists who belongs to the  Divers Gauche in France. He has lead since 2002 the fortunes of the community. He was able to defend the mayor's office in the local elections in 2014. In the council, he has a lush majority of 22 seats, and is faced with only five representatives of the opposition UMP and two independent rightists. His current term ends 2020th
The Mayor with the pious name Lacroix (the cross) describes himself as a "freethinker" and socialist and a member of the Association de la Libre Pensée de Haute-Savoie , as Lorenz Jäger in the Frankfurter Allgemeine Zeitung reported.

"Our Lady of the Lake Geneva Watch over your children" 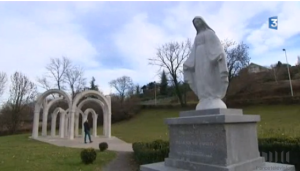 Publier: statue must be removed from the park
He is disappointed abou the decision of the Administrative Court: "I did not think it would come so far. The statue is a reference point for all. All have supported me, even the Muslims."  Pastor Robert COLLOUD is also disappointed. He had organized together with Mayor Lacroix moving  the statue. It is a modern remake of Don Camillo and Peppone.
The free thinker and the priest knew the perils of secular state doctrine, which applies in republican France as an untouchable taboo. Since there was broad consensus for the relocation of the statue, they were looking for a way to satisfy any applicable law and still be able to put up the statue. And they believed this path has also been found.
The municipality leased a few square meters of public parks with the symbolic rent of three euros per square meter at a private club. Then on the other hand priest COLLOUD could locate it on the parish. The club was set up to make the statue and the small area in the park with the pedestal inscription: Notre-Dame-du-Léman veille sur tes enfants (Our Lady of the Lake Geneva watch over your children).

However, not all "free thinkers" and socialists think like Lacroix. The Fédération nationale de la Libre Pensée (National Freethinkers Association) went against the statue before the Administrative Court. It is a disgrace that non-Christians would have to pass the statue in the park. The Administrative Court agreed in their favor.  Of course, the judge did not address the question of reasonableness, but referred to the applicable rules. This prohibits the establishment of religious symbols on public property.
Mayor Lacroix is one of the "false" freethinkers club. Its Association of libres-penseurs de France (Union of Freethinkers of France) founded in 1901 was divided from the Fédération in 1995. The latter sees itself as the "guardian" of the law on separation of church and state. Its guiding principle is "to promote the rational and scientific principles to overcome the dogmas" led in fact to establish a secular dogma which the municipality Publier is experiencing.

The freethinkers society   celebrated the verdict: "A victory for secularism. Now the mayor must remove the statue. This will be a good example for youth. I wonder if the Catholic religion is indeed compatible with the Republic," said the representative of the Federation of Upper Savoy.
For now, it is unclear where the statue is to be placed. The freethinkers have already called for "the mobilization of all the forces of the Republic", should  the mayor Lacroix not quickly implement the Administrative Court's decision.
Lorenz Jäger recommends: "Don Camillo should order  buttons  at the expense of the municipality: Je suis Marie".
Text: Giuseppe Nardi
image: Tempi
Trans: Tancred vekron99@hotmail.com
Link to Katholisches...
AMDG
Posted by Tancred at 2:09 PM

So the "state" dictates to the public what they want to have in their public square. Religion is a public, not a private pursuit. Who is the "state"?

The state is the Directory....France never came back from the Révolution.....wonder if it was the statue of Marianne....

I would like for a crucifix to replace the statue of libertas.

It hurt my heart that this blasphemy could prevail...The world is a mess and they want to rid Mary of her stately image? Nothing can take her place.

and France was one of Mary's favorite places to appear...What a travesty.

Strange how history repeats itself ,when the Nazi's came to power they banned the Crucifix from all public places, schools ,hospitals ,and we know why ,the last thing they wanted was symbols to remind people of Gods Laws when they were bent on genocide ,no different today ,when you want unlimited abortion and euthanasia ,you can't have symbols claiming God is the Creator ,and life is something sacred. http://www.historylearningsite.co.uk/church_in_nazi_germany.htm

'The State' is the Masonic Grand Orient Lodge of France, and has been so since 1793.

The enemies of the Church are aware, strongly aware, of the importance of symbolism. The post-V2 Church has lost that awareness; the SSPX has not, thank God.

Catholics should emphasise their Catholicity, emphasise the Mother of God, the character of the Mass as a true & objective Sacrifice, scapulars, Marian feasts, dogmas, devotions & processions, the various scapulars, the Miraculous Medal, indulgences, feast-days - all the Catholic stuff that no ecumenism can reduce to nothing.

Unless we become far more Catholic, the Church will become ever less Catholic. This is all the more necessary, in view of stuff like this, from March 2012:

One reaction was this:

The Nazi's banned catholicism in France??? Where in the world did you read this falsehood?