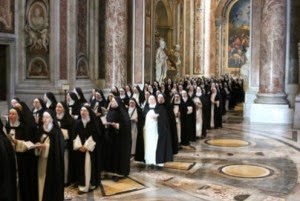 Lovely story. Thanks, Tancred, for posting it.

Shocking News: Pope Francis begins to crumble: nobody is coming to Pope Audiences

THE ABOMINATION OF DESOLATION HAS ARRIVED...

But I would want further reassurance on what has been asserted about the relatively empty square. The camera angle is from afar - but, also, I'd want to see comparable weekday photos of crowds at Wednesday papal audiences for winter's days in February to make a true and fair evaluation of Rorate Caeli's assertion that there has been a collapse in the numbers going to see Pope Francis. - Tony from Oz

Oh - and by the way - Eponymous Flower - as much as I enjoy your blog - would it be possible for you to consider using a larger font size than the present tiny one. It's doing my eyes in!

if you press and hold the "ctrl" button, then press the "=" ("+" on some keyboards) key next to "delete" repeatedly it makes the text larger, doing the same with "-" key next to "=" makes it smaller :)

It was an opportunity lost for the Faith when the SSPX did not return to Rome when Pope Benedict offered repeated opportunities. It was the main aim of his pontificate, sadly wasted.

Actually the deal was torpedoed by the people who ushered +Bergoglio in when they offered an agreement for signing that wasn't what they'd agreed to.

Maybe it's just you, but most people wouldn't sign an agreement or trust a party that changed the terms of their agreement midstream.

I think the change of agreement really showed a change in administration following Wikileaks, but never mind that.

Thanks Anonymous, I was just getting around to answering this.

The abomination of desolation has been here since the mid 1960's.The Great Apostasy has been going on for quite some time,friend.

What an amazing - and very welcome - article :)

"Surely you mean the 1760s?" Care to explain that further Tancred?

The French Church was rotting, but it was hard put by everywhere in Europe.