Edit: seems to us that whatever Catholic apologists writing for a conservative audience might think, the overwhelmingly Leftist world press reads his message loud and clear.  Barcelona Revista is a "satirical magazine" with a circulation of 30,000, according to Wikipedia. We got this story from one of the regular posters.  Putazo is a term often used affectionately between males who are good friends in a vulgar but jocose manner. 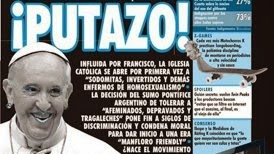 The satirical magazine Argentina Barcelona published in its latest issue a controversial cover bearing an image of Pope Francis in makeup under the headline "Putazo". [Faggot]
The medium was referring to the opening being impulse by Jorge Bergoglio in the Catholic Church to review aspects as homosexuality and divorce in the Synod on Family taking place in the Vatican .
"Influenced by Francis, the Catholic Church is opened itself for the first time to 'sodomites, inverts and other sufferers of homosexuality'. The decision of the Supreme Pontiff to tolerate Argentine 'effeminates,  depraved', puts an end to centuries of discrimination and moral conviction to begin an era 'friendly to the manfloro [insult against aberrosexuals]'. Are they born priests in a motion as the third sex? Is Bergoglio the 'Pope of the culorrotos'[derogatory slang for aberrosexual] ?"  asks Barcelona on its front.

In an interview with Radio 10 of Argentina's director of environment, Ingrid Beck , said that only a parody, insisting that there isn't any disrespect to the pontiff.
"The Church is engaging in a tendency to speak of homosexuals and it was worthy of putting it on the front page," Beck said, adding that "anyway it is about considering whether or not homosexuals are worthy of joining the institution as people, and that is what is disrespectful. "
"It seems there are no limits for humor, you do not have to be, and there are no limits on the news. It's a parody, humor. We work with the absurd," insisted the journalist.
Link to article...

We all reapeth what Francis soweth.

Sodomy isn't fertile. We reap nothing.

Pope Francis has degraded the Church and the Papacy. he should be thrown out on his a- -
Together with his associates and clinging supporters who porbably are also "faggots" (Forte, Kasper, Ricca,Mariagiaga, Baldiserri, Dolan, Cupich, Chaput, etc etc)

The 'faggots' recognize their own.

If prelates have a clear and present ability and motivation to harm the Church, is it illicit to use ridicule as one of the methods to reduce their influence? I think the less credibility these people have, the better. Whether that is attacked in the particulars, by in-depth arguments against their positions, or generally, by degrading their credibility, are just two different journalistic weapons. (Granted, one is more acceptable than the other, and anyone who uses ridicule risks becoming himself ridiculous.

Read this from mundabor: https://mundabor.wordpress.com/2014/10/18/francis-a-different-cover/

Yeah, I read that. I like Mundabor, but I don't think Barcelona is conservative, and the editor claims she's being sympathetic with what she see's as Pope Francis' bringing aberrosexualism into the Church.

If the shoe fits..

It is fertile for sin and disease of both the body and the mind.