Anticipating the Synod: The Bergolio Effect 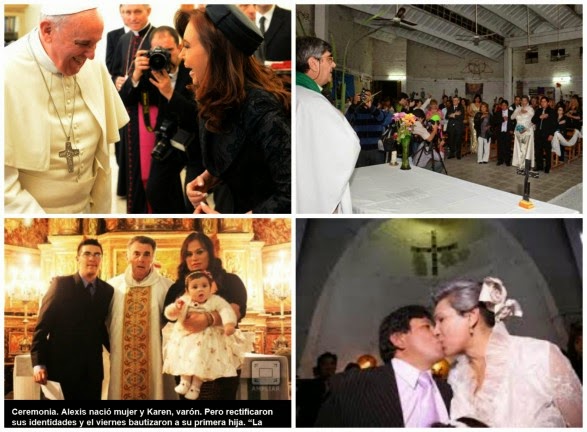 Edit: it was published earlier with some commentary, but probably worth repeating as requested by someone who posted the link from gloria.tv. It's a serious problem.  Will this priest be dismissed?

Those are two men getting their civil "wedding" "blessed". 1. Saturday, Sep. 14 - After being barred from "marrying" them, priest "blesses" homosexual "marriage" in a wedding-like public ceremony in Santiago del Estero

"Luisa Lucía Paz" is a man from Santiago del Estero, Argentina. A transsexual, he is a high-ranking official in a homosexual-transsexual organization activist organization that was prominent both in the approval of the law on civil same-sex marriage and the law on the change of civil names for transsexuals. After this second law was approved, some years ago, he managed to have his name officially changed to "Luisa Lucía" -- he got his new "female" ID from President Cristina Kirchner herself in the first ceremony after the law was changed (source).

Anything goes under the watch of quaint Francis of the Sissies!

Good name for him! Francis of A'Sissy.

the file video was removed from Gloria TV....why on earth???

Someone put the clamps on Gloria TV, beyond a shadow of a doubt, Susan. The same reason that EWTN is quiet about dissent in the Church. A lot of the main stream Catholic media is more or less monitored and maybe funded in part by the Bishops. These media outlets will talk at length about the persecution and corruption from the government and the culture at large, but woe be to them if they utter a word about the corruption/dissent that goes on INSIDE the Church. Mother Angelica years ago got into a lot of trouble for taking some of the Bishops to the woodshed on National TV for their erring ways, I have seen the clips....she of course didn't name names, but.she showed them NO MERCY. You could tell that these dissenters made her FURIOUS. I believe she ended up selling the network not too long after that. Some of the Bishops are very powerful.

About the same time the German Bishops were joining forces with the Green Party, Gomorrist Pornographers, the Germand Feds and people like Volker Beck and David Berger to smash Kreuz.net, there was a similar camaign against Gloria.tv.

While Kreuz is a shadow of its former self, Gloria.tv seems to have continued.