(Baghdad) The Islamic State (IS) has a new yellow star to identify the Christians. The identification of the members of the other "religions of the book" of Christians and Jews is an invention of Islam, where it has an old tradition that goes back to the late Early Middle Ages. Jews and Christians had to each carry their own clothes, so that they were recognized by all Muslims. Therefore, the yellow color is due in clothing for the Jews, which was first documented in the 9th century in  Islamic occupied Sicily.The yellow Star of David in the Nazi Reich to designate  Jews was borrowed from with Islam.
The Islamic State  identifies the houses of Christians in Sunni Islamist occupied Iraq with the Arabic letter N. It stands for "Nazarene", the followers of Jesus of Nazareth.
The Iraqi journalist Dalia Al-Aqidi (Fig. 1), made a dramatic gesture. The spokesperson for the Iraqi television station Al Sumaria  intentionally put a chain with a cross around her neck and criticized the "political-Islamist fascism" before the camera.  She took a  position against the anti-Christian genocide by the Islamists. Already, several Iraqi Muslims are putting their own life on the line to defend the Christians publicly against persecution. Because, "who is silent on the question of justice is a mute devil", said Dalia Al-Aqidi about  her demonstrative step.

"The Exodus of Christians is a Loss for All" 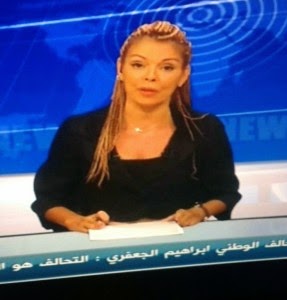 Dalia Al-Aqidi  demonstratively  wears a cross around her neck on TV
Al-Aqidi explained why she appeared on television with the cross around her neck: not only because in the city of Mosul, which has since June been in the hands of the jihadists "Caliph" Al-Baghdadi, a large Christian community has recently disappeared, that shrank recently to a few thousand members. She did it, as the journalist explained, "for the good of the whole country" because the Islamists are a threat to all.
In an interview with the Lebanese daily Al Nahar, the journalist urged her compatriots and the West, to ask the question: "What benefit could  history and culture draw from a return to a dark past?" The exodus of Christians who are faced with the alternative of flight or death, is a heavy loss to all. "The Christians are a part of the indigenous population of this country. Without them we can not go on. "
The Islamists accused Al-Aqidi of  being a "non-believer". The journalist replied that she "firmly believes", that "Islam is a religion of tolerance." Therefore, the Islamists are the "infidels." The journalist said: "The unbelievers are you. You are the apostates, you are the head hunter and executioner. I am a simple person who defends the rights of children of her own country. "
According to Al-Aqidi, Islamism has led  "moderate Muslims like me, to be ashamed for their religion."  It was true that "the fear has led many to silence, but I will not be silent in the face of injustice." The journalist called on all to follow her example.

The "N" of Christians

The journalist Dim Sadek, a Lebanese Shiite appeared on TV with the "N".
Another Shii'te is  now  sending a comparable signal. This is the well-known Lebanese TV presenter Dima Sadek (Photo 2). The Lebanese television station Lebanese Broadcasting Corporation International (LBCI) showed  her ostentatiously wearing a T-shirt imprinted with the Arabic letter ن (N), with which the Islamists characterize the Christians.  Before Sadek began with the reading of the news, she said: "From Mosul to Beirut, we are all Christians."

The Logo of the TV channel

To support the initiative of Al-Aqidi and Sadek, the Lebanese television station has changed its logo in LB ن and launched a campaign to draw attention to the plight of persecuted Christians who was supported immediately by thousands of people on Twitter and Facebook. "The darkest place in hell is for those who remain neutral in times of great moral crisis," said Al-Aqidi  in her TV appearance. The letter "N", with which Christians are marked, has become an outcry.
Text: Giuseppe Nardi
image: Traditio Catholica / LBCI /
Trans: Tancred vekron99@hotmail.com
Link to Katholisches....
AMGD
Posted by Tancred at 8:34 AM

I still believe Islam is a false religion. It's just hard for me to say in front of people like these.

God bless the righteous and the innocent.

Islam denies Jesus Christ as God and Savior, relegating Him to prophet status .Therefore ,it is Anti Christ in nature.

Islam claims that an angel claimimg to be Gabriel
revealed the Quran to Mohammad,
including the denial of Jesus as part of the Trinity and as the Son of God.

Gabriel revealed to Muhammad the nature of the Prophet’s divine purpose, and began inspiring him with the revelations of the Qur’an. For the extent of Muhammad’s life Gabriel communicated God’s wishes and words while acting as a guide for Muhammad
Gabriel performed this function for all of God's Prophets.

St Paul warned us that any such spirit proclaimimng a message
contrary to the gospel proclaimed by himslef and Peter is anathema - there is no other gospel.
Galatians 1
There Is No Other Gospel

7 not that there is another gospel, but there are some who are confusing you and want to pervert the gospel of Christ.

8 But even if we or an angel from heaven should proclaim to you a gospel contrary to what we proclaimed to you, let that one be accursed!

9 As we have said before, so now I repeat, if anyone proclaims to you a gospel contrary to what you received, let that one be accursed!