Three Cardinals at the Third Pilgrimage of Tradition to Rome 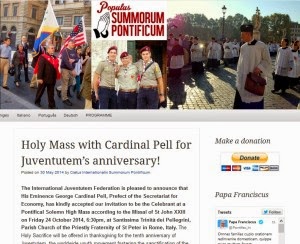 (Rome)  On the coming 23-25th of October in Rome, theThird International Pilgrimage of Tradition will be held. It was organized by the Coetus Summorum Pontificum Internationalis, an international federation of communities and faithful in the Old Rite, which is the implementation of the Motu Proprio, Summorum Pontificum, which  Benedict XVI endeavored and  thus allowed all priests the celebration of the Mass in effect till 1965/1969 in 2007.
The still provisional program provides for the participation of two bishops and three cardinals. The bishops are the Frenchman Francois Bacque, a retired Apostolic Nuncio,  and Archbishop Guido Pozzo, Secretary of the Pontifical Commission Ecclesia Dei , who is responsible for the communities of tradition.

Among the cardinals is Cardinal Raymond Leo Burke the American, Prefect of the Apostolic Signatura. He will be celebrating  Pontifical Mass in St. Peter's Basilica on Saturday, October 25, which is the culmination of the pilgrimage. In 2013 Cardinal Antonio Cañizares Llovera, the Spaniard,  Prefect of the Congregation for Divine Worship, celebrated the Mass. In 2012 it was the Colombian Cardinal Darío Castrillón Hoyos, Prefect of the Congregation for the Clergy from 1996 to 2006 and from 2000 to 2009, Chairman of Ecclesia Dei . Under Pope Francis, Cardinal Burke is among the degraded. The American Cardinal  has been removed from all the congregations to which he belonged. Burke  under Benedict XVI. made sure that good bishops were appointed in the United States. It's an influence that has eluded him Pope Francis.
The second is the German Cardinal Walter Brandmüller, who is on Sunday, October 26, to celebrate the feast of Christ the King witb the Traditional Benedictines of Norcia. Cardinal Brandmüller was, from 1998-2009, President of the Pontifical Committee for Historical Science, casually known as the "chief historian" of the Vatican. In 2010, Cardinal Brandmüller was named to cardinal because of his personal services, who was the first since the liturgical reforms of 1969/1970 to celebrate the Immemorial Mass of All Ages again at the Altar of the Chair of Peter  in 2011 on one of the two main altars of St. Peter's Basilica.
The third cardinal is the Australian, George Pell. As the cardinal deacon, Jean-Louis Tauran announced the new pope on the loggia of St. Peter's Basilica at March 13, 2013, some had thought at the mention of the name Georgium, for a fraction of a second to be the then Archbishop of Sydney. Cardinal Pell may celebrate a Pontifical Mass in the Roman church of the Fraternity of St. Peter SS Trinità dei Pellegrini on Friday, October 24. He is the only Cardinal of the fifth continent who has been close to traditional circles  for many years.

During the pontificate of Benedict XVI. Cardinal Pell was in talks twice, to take over the management of a Congregation of the Roman Curia. In 2005 he was one of the three candidates to succeed the chosen pope. Joseph Ratzinger, as Prefect of the CDF.  The American, William Cardinal Levada was selected, while the third as stated was Tarcisio Cardinal Bertone, whom Benedict XVI.  made a Cardinal Secretary of State.
2010 was already fixed as Pell's appointment as Prefect of the Congregation for Bishops. A campaign was launched against him in anticlerical circles with the accusation that he may have covered cases of sexual abuse, so Rome decided at the last moment for the French-Canadian Cardinal Marc Ouellet.
The allegations against Cardinal Pell proved to be baseless smear campaign. [?] So it happened that the Australian cardinal has made unexpectedly rapid career under Pope Francis. Under a Pope who is not suspected to be tradition-friendly. The first promotion was inevitable. A representative in the C8 Cardinal Advisory was selected from each continent to advise the Pope on the reform of the Curia and the Church leadership,  for America for each of the three sub-continents. George Pell is the only Cardinal of Oceania, which is why he had a secure place among the cardinals.
Once in Rome, Pope Francis entrusted him with other leading tasks at the Curia. However, with those in which the Australian may be more expected to put his organizational talents to the test than his liturgical sensibility and enforcing his understanding of the church.
Pope Francis even made him the prefect of a Roman Congregation. On 24 February,  the Pontiff created  a new "Ministry" as an economic secretariat, in which the entire economic and financial affairs of the Holy See were pooled, and made  Pell the first Cardinal Prefect.
The promotion  under the liturgically uninvolved Argentine Pope seem to have done nothing to change the attitude of the Cardinal, as the appointment of Father Mark Withoos as his personal secretary shows. Withoos previously worked for the Pontifical Commission Ecclesia Dei . Another clue is his willingness to celebrate a Pontifical Mass in the traditional rite at the Third International pilgrimage tradition. A willingness, among the number of cardinals who do not condescend due to an internal distance.

The International Pilgrimage of the tradition took place in 2012 with the declared aim of the traditional rite to gain greater visibility and return it to St. Peter's Cathedral, the main church in Christendom for the first time. 2012  also had a certain hope that Pope Benedict XVI. could even celebrate the Pontifical Mass or at least  attend. It was a hope that did not come true.
The General Delegate of the pilgrimage is the Italian prosecutor, Giuseppe Capoccia of Lecce (head of the Association Summorum Pontificum in Puglia, Campania and Basilicata. Pilgrimage chaplain is a French priest Claude Barthe, Secretary General is the French layman Guillaume Ferluc. The program  can be viewed in English, French and Italian on the website populussummorumpontificum.com.
Text: Giuseppe Nardi
image: Summorum Pontificum Populus / Una cum Papa nostro (Screenshots)
Trans: Tancred vekron99@hotmail.com
Posted by Tancred at 9:29 PM

Sex scandals? I am more concerned about Pell's public denial of The existence of our First Parents and Original. Sin. That is far worse because that removed him from the Church and means in reality that only two Cardinals participated in the pilgrimage.nthis is not my opinion. This Catholic Catechism 101.

This is also a prime example of why Catholicism means more than just the offering of the real Mass. Without the Doctrine and the adherence to it we are lost. That includes Cardinals.

'St Peter's Cathedral'? I think not. The Vatican's St Peter's may well be built on the tomb of the Apostle, but the Bishop of Rome, his successor, has his Chair in St John Lateran, and for that reason this church is the main one of Christendom.

How many different forms of the mass are there now?
Many said in different languages
The unity that formerly characterised exterior catholic practice has been shattered.
The unity that the papacy symbolised has also been downgraded and looks like it too is on its way west.
The spiritual clowns in the Vatican party away.

He seems to be saying that Pell isn't a Cardinal, which isn't his decision to make. It's more accurate to say what he said was materially heretical, but the Cardinal has said other questionable things before this.

There is now no universally unified codified or harmonized liturgy of the mass.

Does this represent the will of God?
I somehow doubt it.

The obvious chaos in the premier catholic form of worship is in my view a consequence of very bad decisions taken during the second Vatican Council and the pontificate of Paul V1.

Going on past form the current Roman catholic pontiff seems not just oblivious to, but also manifestly self- satisfied with the situation.

For ex-friars of the Franciscan Friars of the Immaculate, who want to persevere in their vocation, and/or who need counsel or help

"This [is] Catholic Catechism 101." The pre-Vat2 or post-Vat2 Catechism? I don't see that in the new one. Maybe you can tell me where it is, if indeed its in there.