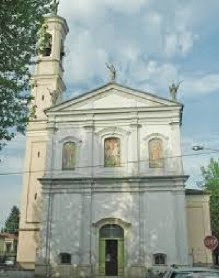 (Milan)   Again the Catholic Church has been a target of sacrilege. The scene of the crime was the Holy Cross Church of San Giorgio su Legnano, in Lombardy. Unknown vandals broke the tabernacle and threw the consecrated Hosts on the floor and smeared it with human excrement, with which they also defiled the altar.
The statue of Our Lady of Sorrows they blackened with the soot of candles and hot wax was poured  over her head. The face of suffering Jesus and  the large cross was blackened, which is venerated in the church, and gave it its name. The perpetrators stuffed wax in the mouth, ears and eyes of Jesus Christ.
Pastor Luciano Premoli called the parish to atonement and prayer. "We have been faced with such a serious, indeed, unimaginable desecration of the Holy Eucharist," said the pastor. Because of the desecration, the   church remains closed for the time being. Many believers have expressed their outrage, sadness and affection for Christ and His mother by candles and flowers in front of the church door. The mayor and the local government  have offered a bouquet as a sign of solidarity. "To the perpetrators, I can only say: shame on you," said the mayor.
On Sunday, the Rosary is prayed and the desecrated crucifix will lead the procession. Then the Episcopal Vicar Monsignor Gian Paolo Citterio will say the purification ritual  for the desecrated church.
The Holy Cross Church of San Giorgio su Legnano was consecrated in 1393 by the then Archbishop of Milan, Antonio de Saluzzo (1376-1401). In 1703 it was rebuilt in the Baroque style in its current form. The church belongs to the Archdiocese of Milan, and thus uses the Ambrosian rite of the Roman Catholic Church.
Police are investigating.  The investigators do not want to offer an opinion as to whether or not they are Satanists or not.
Text: Giuseppe Nardi
Picture: Wikicommons
Trans: Tancred vekron99@hotmail.com
Link to Katholisches....
AMGD
Posted by Tancred at 8:38 PM

Outrage will do nothing.

"the zeal of thy house hath eaten me up: and the reproaches of them that reproached thee are fallen upon me."

It is time to support those who would fight these cockroaches, these -Turks- who for the want of victory in the battlefield, instead contend for victory during a false peace.

Prince Vlad III of Wallachia knows what to do with these heathens. We who profess our faith in Jesus Christ do not need people like him to be our hero, but we who are weak and sinful deserve such a scourge to show us that these vandals are only unafraid because they have not been punished enough. St. Paul taught that we work our Salvation in Fear and Trembling; perhaps it is when men who have endured so much would suffer no more and are willing mirror to reflect unto the world the sort of monstrosity that it produces.

Saints reflect the grace of God. Other God-fearing men who know no other way will show the world its own brutality; it does not matter that it is unchristian to hunt down these vandals and make them pay; the point is you should not desecrate the holy places of God, because God will find a way to punish you.

The Pope should lead us all in serious acts of reparation for this and all the other diabolic acts of sacrilege against the Blessed Sacrament. Lord, show us the way . . .

As long as Catholics stay cowardly and "ecumenical" and "multicultural", this kind of thing will continue to happen. Catholics are helpless lately, but at the same time cocksure and ignorant.. A deadly combination.

Oh, but priests and bishops in many instance say: "Let us be charitable and allow atheists and other sort of non-believers to mock Our Lord, and smear their filth on His Most Holy Body, and to allow them to defame Him and His Church at every instance! Yes, that is so charitable, in fact I feel good about how charitable- and don't forget humble- I am! God is surely pleased at my enduring patience and charity and humility!"

And when traditionalists appear and say that the Post-Conciliar emperor has no clothes, what happens? Where is all that tolerance and patience and humility and charity?

"The perpetrators stuffed wax in the mouth, ears and eyes of Jesus Christ."

Well, you know, one wonders what Jesus is trying to tell us through the medium of vandals. I mean, just looking to the right, in the 'Popular Posts', I read the title regarding a priest: 'Pope Francis kisses hand of aberrosexual activist'. Just imagine the c**p Jesus has to see, hear and taste every day from his clerics in the public eye, never mind the hidden acts.

You know, sometimes I feel like it's all over.

Anything that brings us to sorrow for our sins and that of others has to have a benefit to it.

He will cleanse us thoroughly
from all sin and iniquity
we will live as brothers and sisters
no need to send us any twisters
no more armies, no more wars
no more enemies at our doors.

be watchful, children, be on guard
keep Me constant in your heart
My return date you don't know
but Myself suddenly I will show
in a new and peaceful Jerusalem
a new birth in a new Bethlehem

When a small group of narrow minded atheists in Boston wanted to hold their black mass, thousands of Catholics from around the state came, marched peacefully down the narrow streets of Cambridge and showed them that a Christians response to hatred was an unending stream of love.
It showed how insignificant the haters were, and how it was impossible for them to even make a dent on our belief.
The people of Italy should do the same thing. Drive up there, march slowly in procession, show love and kindness. Show a tidal wave of friendship, good will and care.
It will contrast well with the diabolical smallness of the haters. The devil will scream.

Can the authorities collect fingerprints to find the perpetrators of this terrible act of desecration??

God help us because the enemy is attacking the Church full force now.

Mary Help of Christians pray for us!!

"Forgive them, Father; for they know not what they do."

So EVERYTHING is okay, huh? EVERY sinful action will be forgiven? There is NO punishment for anything? You don't know God at all.

Actually, anonymous is correct. We are called to live and pray for these dirt bags that desacrate or Lord. It's so important, that Jesus made it his second commandment.
Obviously, just punishment is needed and I hope these horrible persons get caught, but remember we are called to live and forgive them, and yes even pray for then that calumniate us and it Lord.
Personally though, I'd have to fight the urge to do serious harm to them, but I'm a worthless sinner anyway

Vlad III? You mean the IMPALER? The guy who DRACULA was based on?

No thanks, I'll pass. Jesus did say "Zeal for your house has consumed me" but that was when He flipped tables and chased people with a whip. He never impaled anyone...

Of course they were Satanists! This is the kind of vile thing only those kind of people could dream up. Milan is chock full of them.

The details really do seem to suggest that.

Love the Lord with all your power. you find the bastard and lock them up in prison. Agree?

This is the work of Satanic descendants ! Let God alone punish them, one way or another, sooner or later! Please God save us and defend us, & Save Holy Mother Church !

This is the work of the Descendants of Satan! Satanists who never stop doing this mockery on God! What ever they do, they can't continue to do any harm ! The harm that they have done will come back to them! God will punish them one way or another, sooner or later ! "Holy Michael the Archangel defend us in the day of the battle, be our safeguard against the wickedness and snares of the devil. May God rebuke him we humbly pray, and do thou O Prince of the heavenly host, by the power of God thrust into hell, Satan and all the other evil spirits, who wander through the world seeking the ruins of souls". Amen .

Is this a comment, or is it advertising?
OR IS IT MALWARE BEARING SPAM?