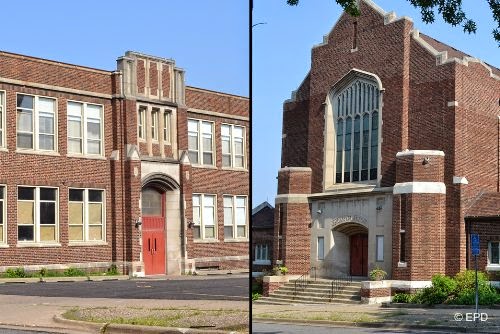 can't sell it to the SSPX though of course

Why does the writer refuse to say which archdiocese this is?

It's the Archdiocese of St. Paul/Minneapolis

please get over your racism. It's very tacky. Muslims are not why the church is being sold. Muslims are paying the church an agreed upon price for a building they no longer use. You hate Muslims...you KNEW the building was being sold, you did nothing, and now that you know who's buying the building, you are mad at them for buying what you owned and discarded. Hate is not the answer. Jesus is LOVE.

Get over your racism.

The church should have never been closed in the first place. No debt and parishioners who traveled long distances to go to Mass there. It was a small parish but we were certainly holding our own. Every possible thing was done to keep the archdiocese from closing our doors including contacting Rome. Our wonderful priest worked tirelessly. We proposed that we at least be allowed to stay until it was sold. Instead, according to the parish council minutes at St. Pascals, the archdiocese is paying up to $100,000/year to maintain a closed building. Look it up if you doubt me. It makes no sense, The worst part of this experience are the lies and denial of the archdiocese. The are still refusing to publicly acknowledge that the sale is pending. Father Byron at Saint Pascals (who we were merged with) again today will not acknowledge who is buying the building. The decision was made by the archdiocese and THEY SHOULD OWN IT. I am tired of being told to sit down and shut up; that the concerns we have are not valid, not listened to and do not matter. Be accountable for what you are doing and say why. Christian groups made offers, Catholic families asked to purchase the rectory. Hate has nothing to do with this.

Hate has everything to do with this.

Certainly not by the parishioners of Saint Johns.

If you use language like that, you're just as soft-headed (possibly evil) as the people who were responsible for the decision to sell of the patrimony of the Church, make concessions to those who would destroy the Church, and give succor to the enemies of the West who, I might need to remind you, we had virtually driven back into the deserts and marshes where they belong by 1945.

Thanks multiculturalism. My own suspicion is that people like you deserve to have your birthright given away to strangers and be sold into slavery...

Unless you are saying of course that conservative, Catholic churches are hated by some, especially in our area. Then I would agree that hate has everything to do with it.

Oh Tancred, you are the one full of hate. Sorry if my language offends. You have not walked in my shoes or fought the battles for my beloved parish. I know full well the dangers of Islam. You could not sit in the pews and read our Pastor Pages and not be fully educated. There was an agenda to close our parish, plain and simple. We fought long and we fought hard. We continue to fight. I was so grateful when you picked up the story,hoping somehow people could unite and prevent this sale from going through. Instead you inflict more pain into this tired and weary heart. We will continue to spread the news, continue to try to prevent this from happening again. I have no more to say.

Good observation. Maybe that is because I am a female. Bless you sir. I hope you don't treat all of the women in your life so poorly. I am really done this time and I forgive you for being nasty.

It's not a virtue.

When the Catholic Church's hierarchy can be hijacked such that it vitiates that structure to the point where it's not owed any releverence or obedience isn't going to be ameliorated by a tiny group of mutually hostile antagonists claiming to be the real church.

You people somehow manage to introduce these irrelevant and thoughtless nonsequitors into everything.

I believe the Franciscan Brothers of Peace made an offer and were turned down a few months ago. They minister to a sizable Burmese KaRen Catholic refugee community who are bursting at the seams while being accommodated among two parishes, the main one being Blessed Sacrament. They need their own parish, and here is an empty Church, but instead being sold to Muslims.

I don't think that the person who's is upset that a Catholic Church is sold to Muslims is a racist. I don't believe it has anything to do with race but with desecrating acts. As long as they get the money they don't care whom it is sold to. JESUS IS LOVE but He turned over the money tables in the Temple. It's the same desecration as i.e. renting out the church to freemasons to hold their spaghetti feast in the main Church of a suburb of Brussels. A freemason former colleague (more than 20 years ago) of mine said : I put my child on the altar and told her to trample on it as hard as possible and I enjoyed it. The altar btw was used as table to cook the food on. Shame on you all "servants" of the Church, no wonder that the Fatima seers saw so many priests, cardinals, bishops burning in Hell. One of the Chief docs in the hospital where I worked in those days,- he was a 33rd degree freemason, and one of the 1st in the world to do IVF, abortions, cloning, - said to me one night while waiting to deliver twins, :"how long are we freemasons now fighting against the Catholic Church ? It will be almost a 100 years. Well I guarantee you that before the year 2000 they won't talk about a "Catholic" church anymore." I heard Our Lady of La Salette say : the devil will be given a 100 years to test the Church.
The devil will use whatever he can to destroy everything that is sacred. In God's name, in Jesus name, in the name of the Holy Spirit, it's the highest time to stand up against the politicized clericals. Riki