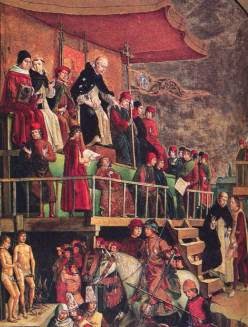 Trans: Tancred vekron99@hotmail.com
Edit: But they're also sending a visitor to the Sister of the Immaculate, according to Rorate.
Photo from...
AMGD
Posted by Tancred at 5:06 AM

So many others do so much worse than these two idiots. Why excommunicate them?? Come on, Rome. Give us the real reason.

This leaves me in a state of wonder. This Papacy leans in one direction then yet in another. We traditionalists are criticized for remaining faithful to the Church while modernist heretics are left to do as they wish. Now the leaders of the modernist group "We are Church" have been rightfully excommunicated. This of course was not an overnight decision, there are 4 steps to someone or a group being excommunicated unless they incur it Latae Sententiae. The investigation of "We are Church" started in the reign of St. John Paul ll and continued in the reign of Pope Benedict XVl, the 4 steps have been completed and Pope Francis has excommunicated them. "We are Church" has been a modernist vicious group causing divisions and heresies to spread in the Church. Thank God they are gone! Let this be a lesson and a warning to all modernist heretics.

You will find the real reason as to why they were excommunicated by Rome, in looking up who "We are Church" really are and what they demand of Christ's Church. Just yesterday "We are Church" had a letter for the Pope which was to be released today. In that letter they were once again spreading their errors against the Church.

Because she's a wymyn-priest? What's worse than sacrilege and posing as a theologian?

And now on to pro-abortion "Catholics" Nancy Pelosi and Joe Biden.

Most of the Neo-Catechumenal Way ought to be excommunicated, while they have an absolutely invalid liturgy devoid of sacrificial content and with invalidating form, matter & intention. Kiko Arguelo is a rank heretic.

With the post-conciliar papacies there is nothing to wonder about - they are liberal modernist enemies of Sacred Roman Catholic Tradition. You can expect only equivocation and ambiguity coupled with hiding behind collegiality and relativist indifference.

"Glory be to God for all things." St. John Chrysostom

I certainly won't say that of St. John Paul ll nor of Pope Benedict XVl. The problem with these two Pope's were not in their Magisteriums but rather in people who looked only for what they perceived to be wrong with them. Also people who condemned them for not saying things the way they would have said them. People who seemed to insist that these two Popes should have been busying themselves with excommunications and hurling Anathemas instead of wasting their time clarifying the truth through Apostolic Letters, Encyclicals, Exortations and Motu Proprios. I guess there are those who did not want to hear these Popes condemn modernist heresies with words but instead with literal clubs and stones, that would have been more fun for us.

The conciliar church has been simulating the Mass for decades. Will they excommunicate themselves? Oh, wait.

I congratulate those traditional Catholics who have optimistic viewpoints. I pity those who live in the dark knight of pessimism making their lives a living nightmare. Sad that a few desire to live in a world where everything is negative. I have learned a very important lesson about life from them.

The Pope desperately wants to not excommunicate anyone. But at what price does he mete out an easy way to Salvation?

Religious organization intending is necessary in addition to plays an important part within moulding our house life. This teachings mildew our specific heroes which we all show themselves inside the family members. Our kids is built with love, honesty, you can read more http://mordo-crosswords-solution.blogspot.com/2014/06/church-platform.html