In Memoriam: The Valiant Swiss Guards and Their Deeds at the "Sacco di Roma" 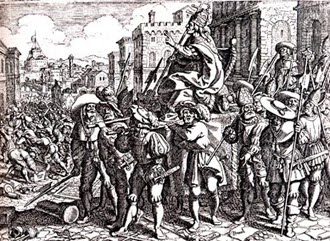 Edit: Today, the Swiss Guard introduces 30 new recruits into its ranks who are swearing their oath to the Holy Father.  They are from all parts of Switzerland, some speaking French, Italian and German.

The oath takes place every year on May 6th, in remembrance of the "Sack of Rome" in 1527.  It was then that 147 Swiss soldiers fell defending Pope Clemens VII.  Today they are counted as the "smallest army in the world."  It was their valor and that of their leader, Captain Röist, who fell, even as his wife looked on, which gave the Pope time to escape to down the Borgo, a secret passageway, to the Castel Sant'Angelo and to be safe for a time from the depredations of Charles V's Lutheran and Spanish soldiery.

The main problem for the Swiss Guards today is that The Vatican City is being sacked by the delinquent liberal modernist ruling elite under papal auspices. This is rapidly developing into yet another display of post-conciliar liturgical, pastoral and doctrinal disorder. Chaos is the most appropriate word and diabolical disorientation is its process.