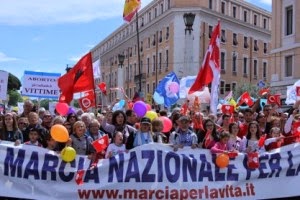 (Rome) Last Sunday, the 4th of May, the fourth March for Life was held in Rome. Within a few years it became the largest  right to life action in Italy and one of the largest in Europe. On the first march on May 28, 2011 in Desenzano on Lake Garda, 600 people took part. Since 2012, the March for Life will take place in Rome. Last Sunday, 50,000 people for the right to life marched through the streets of Rome to protest against the murder of innocent children by abortion. The fourth march was dedicated to  the recently deceased legal philosopher Mario Palmaro, who was one of the founders of the Italian March for Life.

March for Life has "Revolutionized" the Pro-Life Movement in Italy

The initiative led to a radical change of the right to life scene in Italy. For many years this was coupled in a kind of  alibi for   the ruling Christian Democrats, although here and there in relation to reassure the electorate's anti-abortion position, but took no action against child murders. The March for Life originated in the United States. Its adoption in Italy provided a powerful break from the  political party embrace. Since then, the pro-life movement on the Apennine peninsula is independent and since then, her voice has become audible in the public debate. All major media reported on the extraordinary feed on the right to life march, which coursed on Sunday through the streets of Rome and ended in St. Peter's Square. The success was expected neither by pro-abortion nor opponents, was invited four years ago for the first time to a "march". The march is not an organization but an event and sees itself as a platform for the protection of life. All groups and organizations may participate in it on the basis of a clear common denominator: an uncompromising NO to abortion and the injury of innocent life. 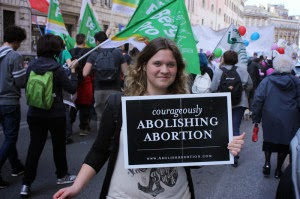 Relevant initiators of the march are Catholics who could no longer endure the suffocating situation of the pro-life movement in Italy. Among them is mentioned in the first place the historian Roberto de Mattei, as ever, he has  discovered traditional Catholics to play   a central role in the March for Life  in the city of the pope. With this addition to members of various other orders,  the Franciscans of the Immaculate were there from the outset.  Many brothers and sisters took part in the march, but above all they recruited at all their branches and involved churches and places of pilgrimage for the march.
As early as 2012 and 2013, led the march for life again after a two-hour course on St. Peter's Square, where they  participated in the Regina Coeli, as the   Pope concluded. Unlike previous years, this time thousands of Pro-Lifers went immediately to St. Peter's Square. By their banners, the burning issue of the mass murder of unborn children to the media was made ​​even more visible.
Pope Francis, who greeted the participants in the past year and to petition the European citizen petition One of Use - was only evident in Italy, although it was an EU-wide action,   last Sunday stressed yet more the international character, the the initiative March for Life has now. Coming from the U.S. such marches take place as found today in several European cities such marches, including in September, also in Berlin and Zurich.

In Memoriam of Mario Palmaro 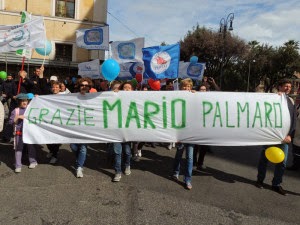 In front of  the church of Santa Maria degli Angeli and the Martyrs, the chairman of the initiative March for Life, Virginia Coda  Nunziante said in her speech: "We show that there is a movement for life, that it is alive and that it has not resigned in the face a widespread indifference and the daily killing of innocent children in the womb."
One of the most poignant moments of this year's march was when the Chairman called for a minute of silence for the deceased last March, legal philosopher Mario Palmaro: "This year we have a painful gap in our ranks:  of Mario Palmaro. He was a teacher in thought and life for us. To him we want to dedicate this fourth March for Life ". A banner was to read: "Thank you Mario Palmaro".
Mario Palmaro, who was only 45 years old, died on March 9, from an incurable disease, one of the initiators of the Italian edition of the March for Life. The  convinced life defender  was among the most intellectually fierce critics of Pope Francis and the conduct of his office in his last months of life.  A year ago he had taken yet on the third march for life. In the morning before the march Bishop Marco Agostini celebrated a memorial Mass in the Immemorial Rite in the crowded Carmelite church of Santa Maria della Vittoria for Mario Palmaro. Another Mass in the Immemorial   Roman Rite was celebrated after the march in the equally crowded church of the Fraternity of St. Peter in Rome, SS Trinità dei Pellegrini. 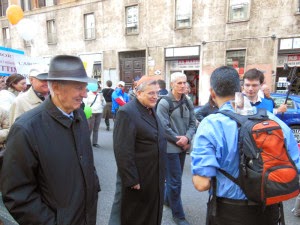 14 cardinals supported this year's march. Previously, it was only Cardinal Raymond Burke, who moved especially demonstratively through the streets of Rome and invited the bishops and cardinals  to go anywhere in the world on the road for the right to life and against abortion and euthanasia.
As in past years Cardinal Burke led Eucharistic Adoration on the eve of the March in the Basilica of S. Andrea della Valle. And again  the traditional Cardinal demoted by  Pope Francis walked along all the way from Piazza della Repubblica to the railway station to St. Peter's Square.

On Saturday Cardinal Burke took part in   an international right to life meeting, which took place in Via della Conciliazione in the hall of Pius X.. In his speech, the cardinal affirmed the prohibition of the Catholic Church against giving  Holy Communion to public sinners. The Cardinal thus supported by the presence of 52 leading Pro-Life  advocates from around the world who appealed on the same day to the Catholic bishops, "in a spirit of love and mercy" to refuse Catholic politicians who are for abortion Communion. The appeal was supported by the Rome Life Forum organized by  LifeSiteNews, Human Life International and Family Life International. From the German-speaking countries, Jugend für Leben joined in the appeal next to the offshoots of Human Life International.  The March for Life in Rome was supported by 107 Italian organizations, associations, initiatives, groups, and even parishes.
The next March for Life will take place on May 10, 2015.
Text: Giuseppe Nardi
image: Corrispondenza Romana
Trans: Tancred vekron99@hotmail.com
Link to Katholisches....
AMGD
Posted by Tancred at 8:28 PM

For the second year running - the RAI TV NEWS DID NOT mention the 50,000 marchers to Rome and their "meeting" with the Pope .....so the MESSAGE is rather restricted ...I checked both noon-day and evening news - nothing , nada nulla...

A regime - or a conspiracy are defintely two words that one could play around with here... How can 50,;000 MARCHERS FOR LIFE be ignored - when every other demonstration that marches on Rome is reported with no problem...at all...

I think His Holiness said that he didn't want to talk that much about abortion any more, or something to that effect.

Indeed, he thinks it is too obsessive and that we mustn't judge. This is because they don't want to embarrass the ruling elite nor do they wish to disqualify themselves from being members of it.

As with all of these events ask yourself - how many cardinals, bishops and presbyters are at them? Precious few. Most are moral cowards, too self-absorbed or actually agree with the satanic anti-life agenda.