Rodriguez Carballo Lets the Cat out of the Bag: “Fidelity to the Council is Not Negotiable" 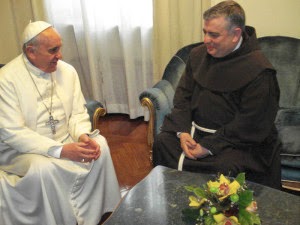 (Barcelona / Rome) Does the Congregation of Religious suffer from a villainous portrait of  tradition? This question has hung in the air since last weekend. The Franciscan José Rodriguez Carballo, for a year secretary of the Congregation for Institutes of Consecrated Life and Societies of Apostolic Life, participated in a Conference of Religious of Catalonia. In his speech he delivered  last Saturday  without directly mentioning the Order by name, gave a first official hint as to why the Franciscans of the Immaculate have been reprimanded by his Congregation. The reason  implied much to the young religious Order, and is of a fundamental nature.
In his speech, Archbishop Rodriguez Carballo said that fidelity to the Second Vatican Council constitutes a central point for the religious life. Literally, the number two of the religious congregation said. "For religious the Council is a point that is not negotiable.”    Whoever see the "reforms" of Vatican II,  all the evils  besetting   religious life, "denies the presence of the Holy Spirit in the Church.” [It’s ok if you deny the real presence though?]

Congregation “Very Concerned": "Not Only Pre-Conciliar, but Anti-Conciliar Training"

The Curial Archbishop stressed that the Congregation of Religious is "particularly concerned”   on the subject: "We see real differences." Mainly because "many Institutes”  are "not only a pre-Conciliar, but even give  an anti-Conciliar formation” to their religious offspring, says Rodriguez Carballo. "This is not allowed, that is to say, to stand outside of  history. This is something that is very concerning to us in the Congregation. A  ”concern ", which is obviously shared by the prefect of the Congregation of Religious, Cardinal João Braz de Aviz.  Also from Pope Francis? There is some evidence.
The conference was organized by the Unión de Religiosos de Cataluña (URC). On Saturday it was open to all religious in Catalonia. Maxim Muñoz, the URC-chairman and provincial superior of the Claretians of Catalonia described the appointment Rodriguez Carballos as secretary of the Congregation of Religious as a "special recognition by Pope Francis."
Pope Francis had called the Spanish Franciscan Rodriguez Carballo on April 6, 2013, just three weeks after his election to his present office.
Text: Giuseppe Nardi
image: OFM
Trans: Tancred vekron99@hotmail.com
Katholisches…
AMGD
Posted by Tancred at 1:32 PM

To HELL with your council god. And the same to those who offer incense to it.

I think it means whatever they want it to mean, especially since most of the world's Bishops don't even pay attention to Vatican II.

This is so hypocritical, another satanic plot by modernist heretics. St. John Paul ll guaranteed the rights of all traditionalists in, "Ecclesia Dei Adflicta" with the powerful words of, "The rightful aspirations of those attached to the ancient Latin discipline must always and everywhere be respected". It is the modernists who reject the whole of Vatican ll, replacing it with their heresies and grave mistakes. Never have I known of foolish men as foolish than the modernist heretics.

The irony of course is that the SSPX Bishops are the only senior clergy I know of, with the exceptions of a handful of Cardinals and perhaps a hundred bishops who actually take Vatican II seriously at all. I think it's very possible that +++Kasper hasn't even read it.

Sorry, I should have said "dogmatic", not "doctrinal".

I guess by this reasoning the FSSP and Institute of Christ the King are going to get slapped down next.

A horrible and tragic mistake for Pope Benedict to resign. Pope Francis = DISASTER

"A horrible and tragic mistake," yes. But sometimes I think that had Benedict waited until death, then Bergoglio or someone like him would've been next. This way, at least we have the somewhat ameliorating influence of Benedict being alive.

From what I understand, even from Maradiaga himself, many of the cardinals have had buyers remorse, and it's reasonable to assume Francis will be succeeded by someone like Scola, whom Benedict obviously anointed as his successor. The only silver lining in the whole sorry affair I can think of is that perhaps in the end, it was better this way.

Scola encouraged the building of mosque in Milan complete with MINARET - it would be the first minaret in Italy..

Scola - is just as modernist as most other Church leaders - he mixes a lot of ideas - including traditional ones.

No less than a true saintly man as the Pope will save us - a man who would be a martyr rather than compromise the love of Christ for His Church...

Whoever see the "reforms" of Vatican II, all the evils besetting religious life, "denies the presence of the Holy Spirit in the Church.”

Benedict XVI's abdication was not freely chosen....don't believe the propaganda.

Right on: because the 'teaching' of VII have done so much to 'renew' and promote religious life. This is why the convents and seminaries are full and the Catholic schools are running at full capacity and every parish has several priests in this 'new springtime'. Why, we hardly need a 'new evangelization'.
Oh---sorry, I was dreaming.

That is why the "oaths to Vatican II Council" and such absurdities were being proposed by Fr Volpi, Commissar, to the FFI - they were not in line with the VII church as they had great numbers of vocations to the priesthood and religious life.

The Archbishop is obviously in the wrong shop, the commissariat is down the road.

What a load of rubbish. Well, if Carballo let the cat of the bag, then the cat should just run off and hide under the sofa.

Kind of "on-topic", Tancred, have you heard anything about this?

'by their fruits you will know them'

Vat II was a a binding doctrinal council... so how did the church get into its current liberal mess?

TYPO above: Vatican II was not a binding doctrinal council.

Unless they want a pretext to run someone out of town.

Sigh! I still love Benedict ....despite all ...I would have thought he would have offered his life for the truth ...I'm just still a dreamer abiut him probably...

after all that has happened and after all that I have read, I now agree with the first poster - to hell with that Council...the Devil's Council...what else can it be - The Master of Confusion's signature is CONFUSION and DIVISION especially about doctrine, morals and Holy Mass ..Well who can disagree?

Typical of leftists when they are in charge. Punish anyone and everyone who doesn't follow them off the cliff. The heresy of modernism which infects the church to the highest level will one day be done.

I too DEEPLY miss Pope Benedict and had looked forward to watching him grow old AS POPE until his natural death. I agree that Pope Francis is a total disaster. :(

I would like to read the complete story on this. Maybe what the Archbishop is saying is that Pope Benedict left another document to accompany Summorum Pontificum, and that's Universae Ecclesiae, which specifically rules that people of the Extraordinary Form should not question the validity of the Ordinary Form.
Maybe...just maybe, the traditionally inclined of Religious communities forget that?

I hope you are right. If there is "buyers remorse" perhaps we can hope someone like Pope Francis will NOT happen again- at least for many, many years to come.

The SP already made that clear - the devil was in the details. I said at the time in many places - unless you accept the validity of the NO you cannot have the TLM. However, Pope St Pius V's Papal Bull "Quo Primum" guaranteed us the right to the TM perpetually. The SP cannot abrogate this exploiting its invalid protestant anthropocentric ECUMENICAL NO service.

If he had lived on as Pope he would have introduced his hybrid Mass combining Latin and vulgar tongue and put an end to the TLM and NO. Thankfully he was forced to abdicate otherwise this would have added yet another complication for those of us faithful to the TLM, preferably pre-1962 Books.

Yeah, those traditionalist bootlickers are just lucky to be alive.

Fidelity to Christ is the central point of the Catholic religion ,anything that distracts from Christ and his teachings is Anti Christ.

I doubt Vatican II is necessary for salvation.