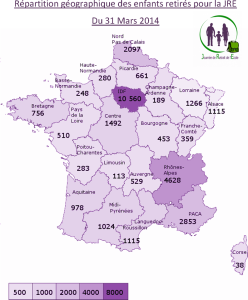 (Paris) On March 31, the second day of protest to the French parent initiative Journée de l'école de retrait (Jre) took place, which is supported by Printemps francais. In protest against the socialist re-education policy on the basis of gender ideology the parents are keeping   their children  out of school  one day a month. The initiative is one of the actions that have arisen in the course of the protest of the civil rights movement Manif pour tous against "gay marriage".
On  the first day of protest 17,924 students stayed at home, then  on March 31, there were 31,548, almost twice as many. The parents' initiative may include only those cases that have officially joined the initiative. The actual number of students who were kept  home deliberately by  the parents, is therefore estimated  to be even higher.

Twice as Many Children Kept From School

The second protest of the Journée de l'école de retrait was  a  "great success" said the initiator, the writer and filmmaker Farida Belghoul. "The participation grows. The reprisals scare the families less and less. The more time passes, the more parents despise the illegal and senseless pressure from national school board. The stronger the identity of the parents, the more they are connected to their traditions and the more heroism they demonstrate  by taking part in the protest days. "
44.8 percent of students who were kept at home, attend kindergarten, 40.2 percent of primary school. These figures confirm that the parents' main concerns were the government indoctrinating the youngest, says Belghoul.

No to "ABC of Equality"

Farida Belghoul and Béatrice Bourges are the two women who have organized the unusual parents protest, which is directed against the state school program ABCD de l'égalité (ABCs of Equality), which was introduced by the Hollande government  in the autumn of 2013. It it supposed, according to information provided by the government, to "eliminate prejudices and stereotypes" because this could be the supposed starting point for "discrimination". The gender ideologues have so interpreted this   that children are to be "educated" as early as the age of six to "choose their sexual orientation." There is no natural sex and not  merely a husband and wife. The sex could be "selected" by themselves and indeed,  from any of a variety of "gender". The socialist re-education program provides on the one hand, for the destruction of marriage, family and sex as "artificial constructs" and at the same time provide for the promotion of aberrosexuality for"Marriages", "family" and gender. These textbooks are employed like "Father Wears a Skirt" or "Bill's New Dress".

France's Education Minister Vincent Peillon, socialist and Freemason, has been trying for months to downplay the resistance against the state sexualization and re-education program. Participation in the protest was  something he only considers to bee "marginal" and the initiators of an "irrational movement."  But more and more parents are joining the protest and are rejecting the government's attempt to "keep changing the mentality of the students" with the coercive authority of the state, as Peillon  had stated as an objective of the government initiative "ABCs of Equality" in a letter to the school directors.
Text: Giuseppe Nardi
Picture: Jre
Link to Katholisches...
AMGD
Posted by Tancred at 4:18 PM

Last night I turned on the news. It was a Fox station. One commercial had 4 men, supposedly all veterans. They introduced themselves and then announced three of them were straight, some married, and one was gay. The black man was gay and another one said that they have all served their country equally and so should have all things equal including the 'right' to marry.

The sodomite agenda is heavily bankrolled and has the support of the fallen angels and it is a juggernaut.

Fox News is a propaganda tool of the first order. If you make a habit of watching it you'll end up a victim of a big lie. Just as most of the personalities there are. They read and are told lies. They print and reprint lies. They speak the lies they have consumed. They go home and believe the lies they have told.