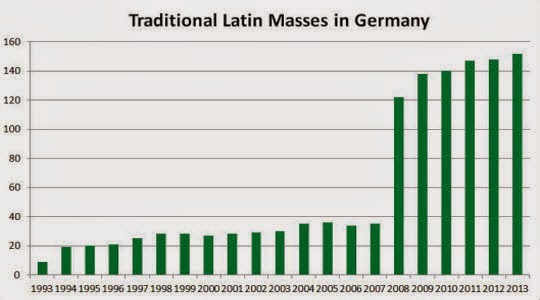 Monika Rheinschmitt is a trained computer scientist. These days, however, she keeps a weather eye on some numbers she couldn’t have imagined in her university days — developments in Catholicism and the growth of the Latin Mass in the German-speaking world.

Monika is the Stuttgart-based Director of Pro Missa Tridentina, one of the most active organizations on the planet to practically support the Latin Mass. Since 1990 she has been the editor and publisher of a traditional newsletter, in 2010 upgraded to the magazine “Dominus vobiscum”, which is published twice a year and avidly read in Germany, Alsace, Switzerland, Austria, Liechtenstein, Belgium and the Netherlands.

An Interview with Monika Rheinschmitt of Pro Missa Tridentina in Germany
Hers is not an easy job, not the least because in these countries the Latin Mass faces an unimaginable uphill battle. In Germany and its neighboring lands, secular attitudes range from indifferent to hostile about the idea of religion itself. Within the Church, both traditional teachings and the traditional rite are often suppressed, ignored or ridiculed in ways that might astonish outsiders.
Even though the numbers of Mass-goers and Catholics continue to drop precipitously in these countries, there seems to be little awareness on the part of Church leadership of the significant power of the Extraordinary Form to attract converts and indeed to bring Catholics home again. (For more about the German church see here.)
Against this background, the gains that the Latin Mass has made are a testimony to the true grit of Catholics, laity and clergy alike. In this exclusive interview withRegina Magazine, Monika gives us a view into her world.
Q. Tell us about Pro Missa Tridentina. When was it founded, and by whom?
Pro Missa Tridentina was founded in Stuttgart in Spring 1990 as an association of  laypeople dedicated to the care of the Traditional Latin Rite of the Catholic Mass. We work to promote this “Vetus Ordo” by supporting Catholic laity who wish to be able to assist at this beautiful rite. That includes the organization of trainings for priests, altar servers and choirs as well as practical help finding locations for the Mass – and from writing letters to the local bishop to preparing the first celebration of a Traditional Latin Mass.

Link to Regina Magazine...
Posted by Tancred at 1:02 PM

There is MORE where this came from here: http://bit.ly/1dMg391