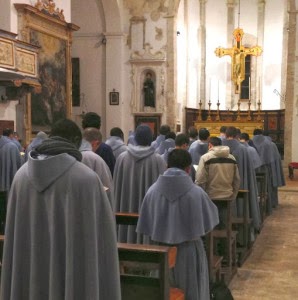 It is stunning that the Pope has allowed such blatant persecution of a loyal and orthodox institute to continue. And why aren't all bishops and priests crying out at this flagrant malicious injustice??? "They first came for the Jews, but I was not a Jew ..."

It was his idea.

Father Volpi has had it out for them for a while.

Thank you for posting this; I sent my signed petition to Germany. I hope the commissar is removed and a holy guardian finally appointed. There is concern that one or some of the friars who brought this about are now in Rome, no doubt lunching with Fr. Foxes.

No Lynda, it is not stunning - it is predictable and consistent with 49 years of liberal modernist revisionism of what the faith is. The post-conciliar popes are all of them rabid reformers who wanted to overturn almost every aspect of tradition in the church for a new, liberal, vernacular and protestantising faith based on collegiality, ecumenism, interconfessionalism and anthropocentrism. They have rigged the structures of the new edifice to adapt the church to the world slowly but inexorably. With the majority of new catholics falling into the similar norms and values of the secular world, the papacies and their liberal henchpersons have done, I am sure you will agree, an excellent job.
They don't care about catholicism. They care about globalism, ecology and world governance with a place of honour for themselves at its head.

It was the idea of this "pope" Francis. I also read for a certain Cardinal O'Brien I think his name is, that "pope" Francis wants to "shake things up" in the Chburch before and during the synod for the Family in October....namely to relax certain long held Catholic traditions regarding marriage and the family.
If he does so, look for a massive walkout of millions and millions of Catholics from the Church, faithful seminarians from seminaries etc. Look also for the SSPX to grow 1,000x over if something like this happens.
The SSPX has trouble housing all the vocations it has now....thanks to :pope" Francis, Fr. Volpi, and the 8 cardinals in Francis' cabinet etc, there will be a flood to the SSPX.
God bless the SSPX, and all religious Orders (now over 30) affiliated to it.

Agreed Leon G. It seems the liberal apparatchiks of the Church enjoy destroying our Faith to make way for the new religion of ecumenism.

I've got a hunch that Pope Francis is more open to dealing with this fairly than many give him credit for. To a large extent, he's insulated from this furor, but if the momentum keeps building, his sense of generosity will win out. And yes, he does have a sense of generosity.

Should we be grateful for his"generosity" after all the destruction he has caused the FFI?

You're deluding yourself. You must be very naïve about this man who is unfortunately the Pope.

I blame Benedict XVI entirely. He apparently,at almost 87 fairly well for a man his age, and entirely lucid and clear of mind. There was no reason for him to resign save for cowardice in light of the scandals wripping thru the Church and the Vatican. He might not have been able to control it or stop it, but he would have continued on the orthodox and even traditional path he had set out on from his first day as Pope.
The media portrays Pope Francis as 90% approved of by Catholics. All we hear is this. The fact is however, that more are leaving the Church due to Francis and his agenda than before.
Francis said that John XXIII was his idol. If Francis really read the writtings of John XXIII as Pope, he'd get a glimpse of the traditionalist he really was, and probably be sickened. John XXIII would probably have been nauseated at what happened to the Church after Vatican II. He in fact didn't even what Vatican II to last more than afew months. His death is what derailed his rather traditionalist agenda....and brought into the open the radical liberals under their supporter (or their stooge), Paul VI.

Tantum Ergo,
I read somewhere that each time people bring the FFI matter up with Pope Francis, His Holiness refers them to Fr. Volpi.

He must be getting sick of that.

I read that Fr. Volpi oversaw the closing of a number of Capuchin friaries (that branch is withering) so was he appointed as the demolition man to begin with?

Old beliefs might be replaced by the new beliefs as the leaves of trees.One should not and could not fight against the divine laws of nature for long.

No, actually, the visitation was begun under Benedict. I was told this by an FFI Brother.