Benedict XVI: "When There is No Struggle, There is no Christendom" 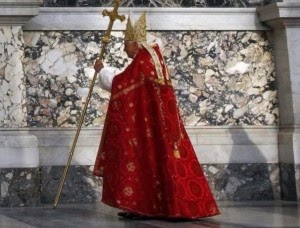 (Ferrara) on the anniversary of his renunciation the newspaper La Voce di Romagna in Rimini  announced on 10 February  a visit to Benedict XVI. On 5 February   "the great Ratzinger", as the newspaper said,  received two long-time personal friends: the fighting Archbishop Monsignor Luigi Negri of Ferrara and Professor Marco Ferrini.  Archbishop Negri is President and Professor Ferrini is Director General of the International John Paul II Foundation for the Social Doctrine of the Church .
"Benedict XVI. received us in the Vatican in the monastery Mater Ecclesia.  We spent 40 minutes together. We found him very alert and present  for his 87 years, " said Marco Ferrini.
About the interview, he said: "We told him that we have regained, thanks to the Magisterium of John Paul II and his continuity between faith and culture,  with the social and political commitment, certainly with some concern because there is a return to some sort of dualism in a part Church, which wants to lead the Church into a position of self-exclusion. Benedict XVI. told us then:  "All dualism in Christianity is negative." He spoke to us of the difficult conditions under which the Church is today and always, suffering more virulent attacks from the world.  And he said that the  Church has always fought and will always fight.  The hostility of the world is one of its essential characteristics, such as the Lord had promised. ,Benedict XVI. said  to us, 'If there is no struggle, there is no Christianity.' "
The newspaper said that Ferrini was as stirred as Archbishop Negri to be able to see Benedict XVI.  again and how impressed they were "about his unbroken spiritual depth and his great gentleness."
Text: Giuseppe Nardi
image: Papa Benedetto Blog
Trans: Tancred vekron99@hotmail.com
Link to Katholisches....
AMGD
Posted by Tancred at 12:18 PM

What is a Magisterium of John Paul II ? I shudder to think.

one hope's that this 'magisterium' is with a small 'm'. one hopes.

He said Extra Ecclesiam Nulla Salus more than any Pope in History.

Here is a sample of JP II's "magesterium"

John Paul II, General Audience, Dec. 27, 1978 -
“Jesus is the Second Person of the Holy Trinity become a man; and
therefore in Jesus, human nature and therefore the whole of humanity, is
redeemed, saved, ennobled to the extent of participating in ‘divine life’
by means of Grace.”

John Paul II, Redemptoris Missio (# 4), Dec. 7, 1990 -
“The Redemption event brings salvation to all, ‘for each one is included in the mystery of the redemption and with each one Christ has united himself forever through this mystery.’”

I took this from Catholic Forum on thee very subject..... (Yes JP II cannot be understood other than through his anthropological phenomenology - he was a liberal modernist through & through).

Jehanne,
Atheists, Modernists, and those enamored with scientism love Teilhard. He is the most revered name in the contemporary new age movement. Pagans love him for his adoration of the earth. Deitrich von Hildebrand condemned Teilhard's doctrine as not only unCatholic but unChristian. His ideas are rightly called by Etienne Gilson, "theology-fiction." Pope Pius XII alludes to this terminology in Humani generis.

All one needs do is trace Teilhard back to his master, Fr. George Tyrrell, S.J., who died excommunicated by St. Pius X. It is telling that the 1992 CCC has 130+ quotations from Pope John Paul II and zero by St. Pius X. Coincidence?

Not only all humanity, but all creation was redeemed by Jesus Christ.

Pope John Paul II " The mystery of salvation is continued and accomplished in the Church, and from
this single source it reaches the whole world. There is no salvation outside the Church. From her
alone there flows the life giving force destined to renew the whole of humanity, directing every human
being to become a part of the Mystical Body of Christ."
Losservatore Romano Oct.12,1981

Pope John Paul II " There is no entering into salvation outside of the Church, just as in the time of
the Deluge there was none outside the Ark which denotes the Church."
Wanderer May 4, 1992

As an ordinary priest JPII spent two years preparing a thesis on the man-centered philosophy of Max Scheler, a German-Jew philosopher who after being a Catholic for a few years, reverted to rigid Atheism. JPII found a new philosophical fascination in the Phenomenology of Rahner, Küng and Dulles and the Existentialism of Maritain and Von Balthasar (the universalist) most of whom proclaimed heresy (e.g. by the denial of the Divinity of Christ and Transubstantiation). In 1956, he became a Bishop with two of his books published: the Max Scheler thesis and his ambiguous book on marriage. At Vatican II he and Ratzinger worked on the Constitution Lumen gentium they stated that the Church of Christ subsists in the Catholic Church and, therefore, that the Church of Christ is not just the Catholic Church! Also, he worked on the commission that drafted the Constitution of Vatican II Gaudium et spes - huh hum!!

Subsists is the key word in all of this with JPII - the Church for him has an unorthodox signification. Indeed and in the context of his phenomenology (one or two pointers above) who can really tell what his "inner conscious" reality was revealing to him about what "the Church" is?

In all aspects of his life and especially his pontificate, JP II's espousal of ecumenism, interconfessionalism and overriding anthropological phenomenology can only lead us to understand him in this philosophical light. Especially from his encyclical Ut Unum Sint onwards he jumped straight toward universal salvation repeating it so often at times it is as if he was trying to force Our Blessed Lord into accepting his perspective. he also repeated Our Blessed Lord's name many times juxtaposed to this belief and to His eternal or everlasting fusion to the universal salvation of all.

Benedict XVI was a pope in the same vein as his much esteemed predecessor, apart from his fortitude to clear up the liberal modernist misunderstanding or outright untruth that "somehow" Pope Paul VI had abrogated The Latin Mass.

I'm not endorsing his phenomenology, but for all of that, there's still von Scheler's student, Dietrich von Hildebrand, and the inescapable fact that the man was the Pope, after all.

Indeed, Tancred "inescapable" - I empathise with you there.