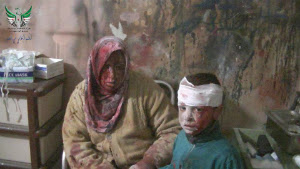 Edit: I just ripped off the whole story from the site. It's a good story, it's just that there's so much advertising on Catholic Online right now, I don't know how anyone could read it.

AMMAN, JORDAN (Catholic Online) - The UN believes that about one million people in and around Homs are suffering from hunger, with several hundred living under the worst conditions, starving to death. Those facing the worst are surrounded by both rebel and government forces, and remain entirely under siege without food. Movement invites danger and any attempt to escape is made at significant risk. Still, many try, driven to the edge of madness with hunger.


According to survivors who have been interviewed, there is nothing but water available. No staples remain. There is no food at all. In the places where some food remains, it is being carefully rationed at starvation levels.

Babies are dying, since they have unique nutritional needs which cannot be met in the ongoing crisis.

The UN is demanding access to deliver food aid to areas under siege, and to help move civilians out of endangered areas. However, even today, as another round of peace talks takes place, a previous agreement to allow this remains stalled.

Adding to the misery is the winter cold, heating fuel is unavailable.

Ironically, the Catholic Church is providing what services it can to people, both Christian and Muslim, Sunni and Alawite.

Fr. Ghassan Sahoui, who was interviewed by the American Catholic News Service in early February told a reporter that people are stealing and that his community is trying to serve everyone who comes to them for help. However, the siege is making it difficult. Most people cannot go to work, although there is little need to work, since there is no food and money is worthless in such a situation.

At least the Church seems to be able to help where the UN and others are ineffective.

Catholics are invited to donate to Your Catholic Voice Foundation emergency relief efforts.

You may also donate to their general food relief program.

Pope Francis calls for your 'prayer and action'...

Were I a head of state, let alone a pope I think I would be in personal contact with whomever is in charge over there in Syria.

"Syrian Girl"'s "8 Reasons Why The NWO Hates Syria!" is a good primer on Syria. I never knew they are one of the last (if not the last) nations opposed to the State of Israel or that they do not have Monsanto/GMO food.

Because they resist Israel's aggression, expansion and persecution of people and states in the ME is the #1 reason that Assad is being persecuted and his country and people are being mercilessly attacked, tortured, starved and killed by terrorist guns for hire. The US-Israel alliance commits crimes against sovereign states and against humanity and is a mortal sin committed daily and ongoingly. These terrorists supported and trained by your/my government and some of our ally governments, behead, rape, torture and today strangled to death in public a little Syrian girl for what offense I don't know. Thanks for the post and the link and the adds at CO are an annoyance and NewsMax is a publication for the Warmonger Party.

And Alan Aversa, thanks for the 8 Reasons link. I've forgotten to watch it but now I will.