The Gravedigger of the Church

Some demands of the German bishops, but also the reaction of Cardinal Schönborn on the occasion of the ad limina visit of the Austrian bishops, the task of the foundation as well as the meaning of the supernatural life of the Church. 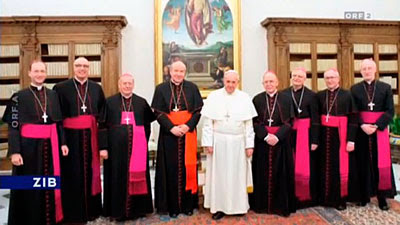 All matters, marriage and the family and in a wider sense including ethics, belong in the area of ​​natural law and therefore also apply to non-Catholics and even the unbaptized.
Thus, the indissolubility of marriage, for example, anchored in natural law and not even a specific feature of the Catholic Church, such as Pope Pius IX. noted at the time (1864).
How much more are Catholics  who are also bound by  revelation and the Divine Law.
Also, the questions on the orderly transmission of human life at the latest by the encyclical Humanae Vitae of Pope Paul VI. (1968) definitively magisterial, so it would not have questionnaires or  still require a special debate.

Therefore, when the German bishops demand, citing the result of the "questionnaires" in their dioceses, to question the attitude of the Church with regard to premarital cohabitation, birth control, remarried divorcees, and even homosexuals, not to be "unnatural", and so they replace natural law by the "explicit outreach" for mortal sins.

Although Cardinal Schönborn notes that for the doctrine of the Church, nothing will change. For him it's all about how to deal with "situations of failure."
But in practice the result is the same as the German bishops: They want - to put it in the words of Bishop Krenn in his opinion on Maria-Troster Declaration - an erroneous, deviation of conscience from the teachings of the Church  to grant a certain universality.
Thus,  this episcopate moves in the footsteps of the reformer Martin Luther, who put his ego and his personal opinion above doctrine and tradition.
The result was not only a schism with devastating consequences, but the reduction of the Church to a humane society without supernatural character.

I trust that everyone knows that Cardinal Schonborn is not and has never beeb a student of Pope Benedict XVI aka Joseph Ratzinger who is a champion of 'conscience' particularly 'an informed conscience'. Ratzinger has written much on this subject throughout his life as priest, bishop,, cardinal, Prefect of the Doctrine of the Faith, Pope.

Schonborn has often been on the wrong side of things i.e., being reprimanded by Pope Benedict XVI w/re to Schonborn's ways. W/Pope Francis, Schonborn indeed may feel able to breathe easier - but we will
see how that works for him in the long run - w/Pope Francis.