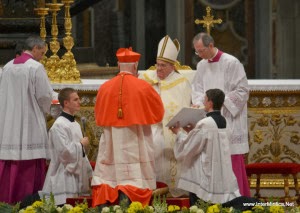 (Rome) Cardinal Müller knows as a longtime bishop of Regensburg in Bavaria, that you belong to God and to the gregariousness of  life. For this reason he planned a Holy Mass of thanksgiving for the occasion of his receiving the Cardinal's hat  on Monday  in St. Peter's Basilica and then to a festive gathering in the CDF.

Last Saturday, Pope Francis had officially admitted him to the College of Cardinals. On Sunday, he concelebrated with 18 other new cardinals, at the Pontifical Mass of the Pope in St. Peter's Basilica. On Monday morning, the new Cardinal and Prefect of faith celebrated a Mass of Thanksgiving on the second high altar of St. Peter's, called the cathedra altar under the gigantic Bernini wood reliquary of the papal throne. Present among the cardinals and bishops, there was also Müller's successor as Bishop of Regensburg, Gerhard Vorderholzer.

There were also concelebrants  next to  Vorderholzer two victims of the anti-Church party: Bishop Emeritus of Augsburg Walter Mixa, and the almost-retired Bishop of Limburg, Franz-Peter Tebartz-van Elst. The Cardinal gave proof, that he does not share the reservations of some German Church circles. While Bishop Mixa, has been prohibited from public activity for  a long time, now operates as an Internet pastor, Bishop Tebartz van Elst has been for almost half a year in quarantine in the Lower Bavarian Metten Abbey. In his homily, Cardinal Müller, said that it was his first task as Prefect of the Congregation of the Faith, to defend and spread the faith of the Catholic Church. Among the many faithful who attended the Thanksgiving Mass and celebrations which followed, were close family members, among others Princess Gloria von Thurn und Taxis, Federal Health Minister Hermann Gröhe, president of the Vatican bank IOR, Ernst von Freiyberg, former Bavarian Finance Minister Georg Fahrenschon. Numerous other representatives of the Church, politics, economy and culture, especially from Germany, including numerous prelates and former students of the former professor of Dogmatic Theology (1986-2002).

I am very pleased to read this post. I hope and pray Cardinal Mueller will truly uphold the Faith and Teaching of the Church undiluted and in all clarity. It is sorely needed today.
I also pray and hope that he can influence the pope to undue the terrible injustice done to the FFI.

Mueller? The "concelebrating", Tradition hating, antiCatholic pope wannabe? You MUST be joking! What king of drugs are you on???

He's been saying some good things, but then I thought Cardinal Kaspers was turning a corner too.