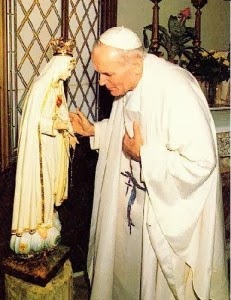 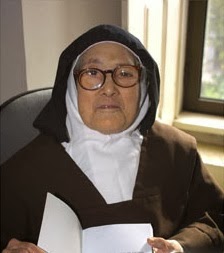 A little later, Bishop Kurt Krenn of St. Pölten said that Cardinal Ratzinger, did not share the interpretation of John Paul II relating the vision to himself. In fact,  Pope Benedict XVI then expressed himself very cautiously  on his 2010  Portugal trip, and left open the possibility that the prophecy has not been fulfilled, or at least not completely satisfied.
Text: Giuseppe Nardi
image: Voz da Fatima
Trans: Tancred vekron99@hotmail.com
Link to Katholisches...
AMGD
Posted by Tancred at 7:40 PM

Fr Blake posted a piece about 'sign and symbol' as, my interpretation, being the only means at times, left for a Pope to communicate. Who knows, maybe Popes have wanted to release the full text, and do a complete consecration, but would the BiShops agree?

On making the Pope a Puppet:

'there is a large body of highly placed clergy beginning with Cardinals and down to monsinger any exercise of petrine authority obsoleces and falls into destitute...the pope no longer exercises Papal authority...to make sure that the petrine exercise of those keys, ceases...'

There were no soldiers, arrows or bodies of religious. There was not even a dead pope. Liars all of them! Especially Dirty Berty Bertone.

are you referring to ' On 16 September 2006, Cardinal Bertone, after only one day in his job as Cardinal Secretary of State, released a declaration explaining that the "position of the Pope concerning Islam is unequivocally that expressed by the conciliar document Nostra Aetate" and that "the Pope's option in favour of inter-religious and inter-cultural dialogue is equally unequivocal."??

if so, exactly what is unequivocal?

Is this the old and worn out "the pope is surrounded by enemies" excuse? I've been hearing that since Paul VI. It has gotten old.

The Vatican wants at all price convince us that the document released in 2000 is "authentic". But nobody claimed, except a few extremists, that it was a fake. There were other means to make it un-authentic, for example in hiding an important part of that document.
Oddly enough, in 1960 the press release saying that the 3rd Secret would not be revealed mentionned in particular that "the Church cannot warrant that the WORDS the Virgin purportedly told to the children are authentic".
The question is:
Where are those WORDS in the text released in 2000?
THe Vatican stays dumb.