Papal Dyarchy in Discourse With Atheists? Kulturkamp of Benedict XVI., 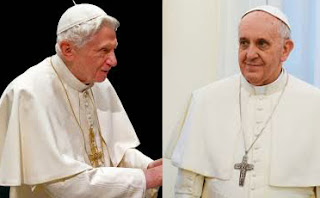 (Rome) The daily Il Foglio addressed recently the unexpected letter from Benedict XVI. to the atheist Piergiorgio Odifreddi. A letter brings the retired Pope back from his self-imposed retreat in the current confrontation between an aggressive atheism and Christianity. One can't speak of "Retirement" of a Pope anyway. The commentary with which Benedict XVI. replied, was addressed to the militant Church opponent Odifreddi, differing from that of the reigning Pope. The question is how the unusual situation of two living popes who act in the same discourse is to be classified. Is it a supplement or an abnormal dyarchy? The historian Roberto de Mattei had doubts (see separate report), whether it would be good, so to speak, for two popes to act simultaneously, even though one is reigning, and the other an emeritus pope. Il Foglio said in the letter to Odifreddi that the actual reason for the resignation by Benedict XVI. visible. But then things had gone differently in the conclave, as originally designed by the German Pope. A contribution to the discussion.

The letter, in which Benedict XVI. Lambastes Odifreddi, Poses the Real Reason for his Resignation

"Very few people in the world, Eugenio Scalfari is one of them, can understand the surprise and emotion that one feels to receive unexpected letter from the Pope at home." It could also just take note that within two weeks, the Pope emeritus had also written an atheist at La Repubblica in secret and watched the effect it would have. One could joke about Emeritus miracle, given the feelings with which Piergiorgio Odifreddi has received the postman. One may note, that miraculous contained in the (current) media triumph of the papacy, but maybe just something artificial. One could also determine that something is overdrawn in the way La Repubblica thrilled at the papal letters, but they were judiciously published and can comment more or less intelligently.

If you read Pope Ratzinger's intelligent lashes against Odifreddi, however, after Francis had lovingly massaged Scalfari's conscience, one might also suspect the two play the game from the good and the evil Pope, one caressing, the other skinning. But it is not.

One may note that the Pax Journalistika between La Repubblica (and virtually all mass media in the world) and the Vatican began the moment when the ruling bishop of Rome decided and signaled that he is withdrawing from the harsh terrain of cultural struggle with the secularization, and instead, prefers a dialogue that emphasizes the freedom of conscience and no longer sits on the bayonets of the doctrine and the dogma (a position that however the Pope Emeritus demands Odifreddi). The crucial turning point was the first meeting of Pope Francis with the press, as he at the end of the attending journalists, "respect" only "silently" blessed.

In view of Roman Catholicism, the resistance (after Protestantism has ceased for some time to be an oblique counterpart to the modern and surrendered without much resistance), and now it appears to be crumbling, the media creates cheering for Pope Francis as a golden bridge, that it must be built for the surrender of the Catholic Church. But even so, it is not.

You could say a lot of things, by varying slightly between the important and the less clearly wrong. The key point is quite another, for whoever wants to see it. The letter of Benedict XVI. to Odifreddi is written in a tone of relaxed severity. He grants the opposite as far as possible out of academic courtesy, but then the blows are mercilessly struck. Benedict XVI. attacks his opponent on the field: "In your religion of mathematics three basic themes of human existence remain disregarded: freedom, love and evil"

All this means two things. That Ratzinger, freed from the burden of Peter, has become again as he always wanted to be, an intellectual and theologian, a thinker who is freer than it is intended for him by others. Now that he is no longer a Pope, he takes back the freedom of a tone of voice that had to suffer from the continuous bombardment of the world. This clearly also points to the dark side of the same coin. That Benedict XVI. no longer felt the power of being able to withstand the highest position in his supreme authority and Church government. The collision with the post-Christian, secular culture of the West, however, he has still grown very well into his role as a theologian. The resignation was an admission that would have been required the energy and power of another for the post that he had not. According to him, a pope should come who can take the same weapons for the same battle, but with a different momentum, force and vigor.

But instead of this, a pope has come to the scene and stage, to change whole theater even more. The Cardinals had understood the resignation of Benedict quite differently than he. As he wanted to pass on to younger hands, so the fight would continue with renewed vigor, some Cardinals saw a chance to disengage from combat. Had Benedict XVI. looked closely, he would have noticed that some Cardinals had not fought faithfully at his side, but at best are "heroic" in Rome for the "all'armi" - called to arms, but exchange the Catholic armor at home with the staid street clothes where political and cultural arrangements are reversed.

The new pope turns toward modernity to another discernment. A little naive, a little smart, he avoids it, to bring them into the field of fire. He is differently cultivated, even Ignatian. We'll see how it goes. Anyway, it would have been interesting to experience a Benedict XVI. on Peter's throne, who responded with such intellectual looseness, but the answer all of the Odifreddis this world and the friends of the false and fraudulent gods who attack the Church, and forced on to fight on their own terrain, where the debate is to take place and the Odifreddi now acknowledges: "The search for the truth."

Link to Katholisches... AMGD
Posted by Tancred at 2:15 AM

Let's be honest, Francis was elected to undo the direction that Pope Benedict XVI was taking the Church....no one will come out and publically say this though...