In a Situation of Chronological Difficulty: Archbishop Zollitsch is 75 -- Good News 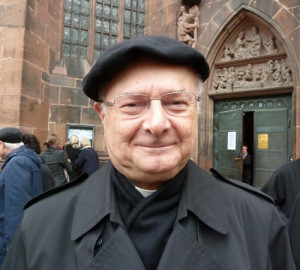 (Freiburg im Breisgau) The Chairman of the German Bishops' Conference, Archbishop Robert Zollitsch, is 75, and thus reached retirement age: good news for the Catholic Church in Germany. In an interview, the Süddeutsche Zeitung conducted with him, the Archbishop of Freiburg, warmed to speak on a favorite theme, “changes". The Swabian from the Danube in the See of St. Konrad means with "changes" to adapt to the zeitgeist. Exaggeration summarized: The practice of the faithful no longer corresponds to the Church's teaching? Then the Church's teaching practice must adapt to the faithful. So urges the Archbishop of Freiburg in rhythmic intervals in Rome on relaxation exercises in terms of admission of women to be in ordained ministries and of admitting divorced and remarried to the sacraments.

The lively Schwabian from Filipowan in Batschka received a corresponding reproof. The Chairman of the German Bishops' Conference still holds, against all the odds, these “changes” are “possible" in the Catholic Church. Above all, he hopes to find in Pope Francis that "good conversation partner." Pope Benedict XVI in not found. The new pope "feels that the one who does not change, going backwards and not forwards" is located Zollitsch safe "look ahead" in its one-sided interpretation of "change", "progress", "going forward" and. The president of the German bishops, however, seems to suffer from chronic hearing loss in specific subject. Francis Pope issued on 27 July in his speech before the Latin American Episcopal Conference (CELAM) in Rio de Janeiro, the admission of divorced remarried to the sacraments as a clear rejection, as his predecessors.

Back in April Zollitsch had sought the admission of women as deacons. It may be doubted that the archbishop thereby confused Deacons with Deaconess. Deaconesses would be the female equivalent of deacons and would exert an ordained ministry. Such a thing has never existed in the Church. However, there were deaconesses in the early Church, but they exercised no ordained ministry. The Prefect of the Congregation, Archbishop Gerhard Ludwig Müller, issued a rejection in June with a concise formula safe side two forms: For women deacons are there in the Catholic doctrine and no basis for deaconesses in the church practice no need .

Pope Francis: No to women's ordination and the admission of remarried divorcees to sacraments

Francis Pope issued CELAM on the 27th of July in his speech in Rio de Janeiro also a clear rejection of women's ordination. A rejection, he repeated the question from a journalist on the flight from Rio to Rome. The issue of women's ordination is "definitely decided", the Pope said: "The door is."

What does it matter Zollitsch. If there are no priests nor deacons, deaconesses, then perhaps no ordained ministry? The archbishop is content. The point of "deaconesses without ordained ministry" Pope Francis did omitted in his rejection:. "For this I am very grateful to him," That even like an dirty pun Zollitsch confused deacons and deaconesses, and it seems to be quite deliberate.

Zollitsch is full of praise and recognition for the new Pope in connection with his statements on homosexuality which were made ​ by ​the head of the Church on the flight back from Rio. What exactly the Archbishop of Freiburg said, therefore, remains unclear, as well as the statements of the Pope on the subject. Both refer to the Catechism of the Catholic doctrine summarizes valid. However, the utterance of the Catholic teaching on homosexuality by Catholic pastors becomes increasingly difficult. Quite different with the former leading homosexual Michael Glatze ( see separate report ). As he was directly affected, was released by his conversion to Christ from the entanglements of homosexuality. He speaks in blunt and clear language, while the pastors seem to be petrified by media and political pressures into speechlessness.

It is known as the chairman of the German Bishops' Conference, the less is its origin and early childhood known Robert Zollitsch was born on the 9th of August 1938 a Danube Swabian in Filipowa in the community of Hodschag in the western Bačka. The area belonged to Austria-Hungary until 1918, the date of Zollitsch’s birth, it was the Kingdom of Yugoslavia and is now part of the Republic of Serbia. In the end of the Second World War it was almost purely a German and Catholic area. In 1944 almost 10% of all the men were shot dead by Tito's communist partisans in the village. Among them was Zollitch’s older, merely 16 year old brother. The mass grave was discovered and exposed revealing the 212 murdered in 2010. Robert Zollitsch survived because he was still a child. With his grandmother and other children in the family today the Archbishop of Freiburg, was interned by Tito's partisans in the concentration camp Gakowa, one of the many camps that were set up for the German minority in Vojvodina. In total up to 30,000 German were imprisoned, especially women, children and old people. At least 11,000 of them were killed. They were murdered or did not survive the harsh conditions. Robert Zollitsch was lucky. He arrived in 1946 with relatives by fleeing to Germany, where the family found a new home in Baden-Württemberg.

In 2003 Pope John Paul II appointed the Danube Swabian to be Archbishop of Freiburg im Breisgau. In 2008 he was elected chairman of the German Bishops' Conference. He was preceded by Cardinal Karl Lehmann. Zollitsch was regarded as a compromise candidate between the progressive Lehmann-wing and the Meisner conservative wing among the bishops. The latter had taken the Archbishop of Munich and Freising, with Cardinal Reinhard Marx as a candidate. As chairman Monsignor Zollitsch would welcome Pope Benedict XVI. in 2011 to his city and made quite a few mishaps with the organizing committee. The Archbishop also turned a deaf ear at the historic speech of the Pope in the Freiburg Concert Hall, with the head of the Church called the German Church to "detachment from the world."

The term of office at the head of the Bishops' Conference ends with the Spring Conference 2014. We will see whether the practice of Francis Pope Benedict XVI. continues where Archbishops are granted a two-year extension.

I don't mean to be a pessimist, but I hope no one really thinks that the person who eventually replaces him will be orthodox or traditionalist. Or even a real Catholic.

Zollitsch wasn't. His successor more than likely won't be either.
If he is, it'll be a miracle.

That may be so but it would be hard for them to be any worse that Zollitsch.

Stop being a wet blanket and just take the good news for what it is.