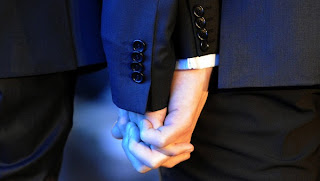 MOSCOW, July 21 (RIA Novosti) – Head of the Russian Orthodox Church warned Western governments on Sunday against legalization of same-sex marriages what he called a sign of approaching end of the world.
Patriarch Kirill said during a service at Moscow’s major cathedral that the recent initiatives in a range of countries to legalize same-sex marriages “is a dangerous and apocalyptic symptom” that should not spread over to Russia, according to Russian media reports.
While those who “fight the laws imposed by the minority are subject to repressions,” Kirill, who leads the Church known for its conservative views, was quoted as saying during his speech at Kazan Cathedral near Red Square on Sunday.
Russian authorities have been repeatedly criticized by human rights groups and Western officials over a recently passed law introducing punishment for “the promotion of nontraditional sexual relationships” among minors.

So far Russia and Estonia for two have thwarted
Western governments instigations of Goo-Rights.
Things our governments do in our names. When they (our governments) instigated in Estonia for goo-marriage legalization a petition to the legislature signed by 38,000 against the proposition, the largest petition ever in this small country, the U.S., Canadian, U.K. and Austrian Embassies displayed Rainbow flags on their facades. Facades mind you.

Patriarch Kirill says to the Council of Europe, that if people choose this lifestyle, they have the right to do so but that it is the Church's right and responsibility to say it is a sin against God. And that the nations are wrong to justify sin by law. And he puts his time and energy behind his words.