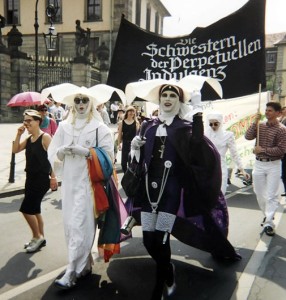 (Fribourg in Üchtland) A group of the SSPX is demonstrating against "Gay Pride" in Swiss Fribourg in a prayer group of the Society of St. Pius X. The SSPX had requested in advance a ban on the depraved spectacle, which was attended by 12,000 people, according to media reports.

Some priests of the Society and a group of young faithful demanded a clear opinion on "Gay Pride" from the Church, as the reported Freiburger Nachrichten. "We want to protect our families and children," and "The Family is in Danger - No to Homo-Foolery" 1 demanded the Catholic prayer group. But they reaped whistles, taunts and insults from the passing aberrosexuals and their supporters.

The Gomorrah tourism, which is drawn to "Gay Pride", showed itself the most in blasphemous mockery against the SSPX group. Members of the group founded in California in 1979, the Sisters of Perpetual Indulgence, aberrosexual men, whose distinctive mark is the costuming as nuns, which shows contempt toward the Catholic Church, joined in a mocking Gloria.

In 2001 the bishop of Sitten, Norbert Brunner, condemned the gomorrhist spectacle as a "diabolical game." Meanwhile the Bishops are silent.

One might think there are too many faggot bishops.

Maybe the bishops were too busy marching in the parade.

Not just the bishops who were silent but the FSSP. And how about all those "traditional latin mass" communities "approved by legitimate authority"? Bah!

Time and time again there is ONLY ONE that stands against evil and as always they stand alone.

May I point out that the silence of the bishops and those associated with the present administration of the Church give assent to these kinds of activities as part of Vatican II's doctrinal changes. The wording in the constitutions of the Council subtly changed the idea of freedom of conscience, always a Church teaching, to mean, not intellectual freedom, but freedom of action. This was perhaps the most powerful one-word change in history! Before that, either in the real Catholic states, or in mixed states, Catholic teaching could assert itself in the civic law of the country. There could be laws promoted and approved criminalizing both moral and economic 'sins' against Christ's flock even when these laws were identified with Catholicism, laws against abortion and homosexuality to name only two. Since the Council and its understated revolution, Catholics are restricted to 'forming consciences' by example only. Documents related to homosexuality by a priest named Seper, and by then-Cardinal Ratzinger are still live on the Vatican website that specifically call for Catholic support of gay rights, with only a few restrictions in the area of four jobs. Although traditional Catholic teaching is reiterated, new 'freedoms' are given in these documents regarding the 'dignity' of homosexuality which opens the door wide enough for a train wreck to barrel through, including gay pride parades like this one. That is the reason bishops are silent--the Church will not speak out or support laws against the sins of others now, on the basis of the new, heretical interpretation of freedom of conscience. If we wish the Church to wake up, we must remove this bit of poison from her throat. We must fight the Council with all our strength.

I'm with you. It really seems the SSPX with God and the real Saints, and the Mother of God are the only
hope. Pray for the Pope.

So we could say that the episcopacy are being obedient
in this case. Thanks. Good comment.

"Meanwhile the Bishops are silent."

They will have their Judgment when they face their Creator.

Would it be so hard to keep this from becoming an intranecine traditionalist scrum?

I have real sympathy for the SSPX, and recognize the important role that it has played in the fight to restore Catholic tradition. But this attitude that only the Society is good, only the Society is worthwhile, that all others are sell-outs to modernism, is unhelpful and quite hurtful.

Why then did the FSSP say nothing?

Yes! Thanks for seeing the point. I have a post specifically on the teaching of the Church on some sexual matters since the Council, called Holy Smoking Gun. It gives the links to the documents by Father Seper and Cardinal Ratzinger. Bear in mind that these documents will reiterate the traditional teaching, but throw in the contradictory new teaching at the end. I had to read them several times to see the carry-away. Check it out.