Edit: could Prince Philip be slated to head the Lutheran Ordinariate's German District?  Will there be a German Ordinariate?  We'd like to think such an obviously traditionally minded, man of Prussia would be at home in no other place than the Catholic Church.  He cites the "feel good" factor of reinstating the Monarchy.

Of course, cousin Crown Prince Wilhelm has married a Catholic. 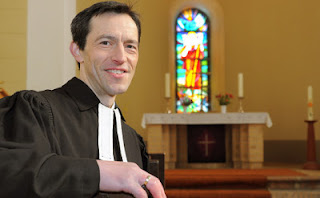 Germans might not know it, but they desperately need the moral guidance of a re-instated royal family, the great-great grandson of the last Kaiser, Prince Philip Kiril of Prussia, told The Local's Jessica Ware in an exclusive interview.

“Subconsciously, I think young Germans wants something they can orientate towards,” said Prince Philip. The 45-year-old father of six may work as a Protestant vicar, but he has become one of the loudest voices out of those who want to see Germany revive its monarchy.

Since Kaiser Wilhelm II abdicated in 1918, the country has been without a monarchy. But Prince Philip believes that a royal family with divine right conferred by God could offer Germany what it is missing.

“When a leader answers to himself, and not God, an atheist-led country ends in disaster. Look at Hitler, Pol Pot and Stalin,” he told The Local. Religion, “tames the selfishness naturally present in all of us.”

For the prince, a country guided by politicians and a ceremonial president means not only is there no strong family to look up to, nor is there anyone to rally up enthusiasm for family life. “A presidential head of state is not enough...what Germany needs is moral guidance and a friendlier face,” which, he added, “people do not get, and shouldn't expect, from politicians.”

Indeed, this appears to be what increasing amount of young Germans want, after a survey for news agency DPA revealed last month that as many as one in three 18-24-year-olds would like the Kaiser back on the throne. Jump to the over-50s, and this figure dropped to one in six.

“Looking up to a king or queen would be much better for Germany's young people than to pop stars or football players,” Prince Philip said. He lamented that people were putting too much value on consumerism and material goods instead of having children – something desperately needed as Germany faces a demographic implosion.

“I am astonished that so many young people said they would be in favour,” he admitted, acknowledging that general public opinion towards the monarchy in Germany was not that positive.

The Prince is right. And when he takes a couple more steps in his thinking he will have realized what Eponymous Flower
realizes. That is, he must become Catholic and bring others with him. Let's pray for him.

I have this concern about the ordinariate. Married priests.
Anyone else ?

They can be phased out.

Ill admit that it will be used as a justification.

Yeh. It is a tricky issues. As some are phased out
others will phase in. If there were a better solution
wouldn't Pope Benedict have thought of it ?

It's usually a dead giveaway that someone is a dissident when they think a married clergy is the way to go.

Absolutely. And I among others worry at it. BUT I just thought of this possibility. As the Old Liberals are
phased out and new well formed traditional priests are
phased in, perhaps for a new period in the Church, this kind
and other dissidence will not warrant even being called 'an issue'. Sometimes I wish we could fast forward and still be
here to see the real renewal of the old Church.

Speaking as an Ordinariate member (albeit in a parish with a celibate Ordinariate priest), I would remind everyone what Anglicanorum Coetibus says:

"§ 2. The Ordinary, in full observance of the discipline of celibate clergy in the Latin Church, as a rule (pro regula) will admit only celibate men to the order of presbyter. He may also petition the Roman Pontiff, as a derogation from can. 277, §1, for the admission of married men to the order of presbyter on a case by case basis, according to objective criteria approved by the Holy See."

So the rule remains - only a derogation can be granted on a case-by-case basis. It is true - I can hear the cynics now - that the reality is that most of the Ordinariate priests in the US, UK and Oz are married priests who have come in under derogations from Canon 277. Yet this was inevitable for the initial wave, since most of the Anglican ministers coming over are married.

Yet the feeling in Rome is that going forward, once the initial wave of converts is through the pipeline, that new vocations will be expected to be celibate (and some Ordinariate priests support that, even married ones). We will see if that actually takes place. Stay tuned.

I agree, of course, that the ancient Roman Rite discipline of celibacy is a wise one, and should be retained - a married clergy creates at least as much problems as it solves, if not more, and diminishes the priest's imaging in persona Christi. It is a discipline, not a doctrine, but it is a wise, prudent, and proven discipline. Celibacy is not the reason for the vocations crisis.

At any rate, a Lutheran Ordinariate looks highly unlikely. I don't see the demand there the way there has been with the Anglicans, and there's more theological distance to be covered than you typically find with most Anglo-Catholics.

Depending on the Diocese from what I understand, a certain amount of adverse inculturation can take place where the Liturgy is robbed of its traditional elements and Anglo-Catholic traditionalism is muted in favor of the old humdrum NO suburbanite liturgy.