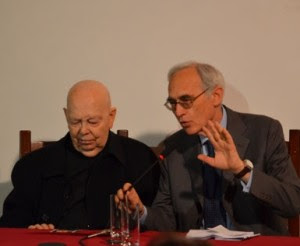 (Rome) The well-known exorcist Gabriele Amorth affirmed recently the importance of exorcism in a lecture evening of Lepanto Foundation in Rome. Father Amorth, an exorcist in the diocese of the Pope since 1986, is a student of Father Candido Amantini, another well-known exorcist, whose beatification process is underway. Father Amorth is also Honorary President of the International Association of Exorcists. The exorcist had choice words for those who deny the existence of the devil, especially the clergy, who do not oppose adequately de-Christianization of society. Because the author of this de-Christianization was the devil himself.

Father Amorth leveled sharp criticism in this context against bishops who appoint no Exorcist and "thereby inflict serious damage to souls." Satan is trying to raise the people against God. He entices them to deny the truth and rebel against God's law, "even though the law of God is the best and ideal law for the people." The "anti-faith statement" of the devil and his followers can be summarized in three points: "Do what thou wilt", "no one has to decide on you" and "you are your own God."

The devil "knows us, he circles us and tempts us in our weaknesses: one must therefore know his own weaknesses and avoid the dangers that are offered today in various ways, especially through television and the Internet". The well-known exorcist warned against spiritualistic practices, each contact with magicians, soothsayers and all who claim to dispose supernatural powers or a "secret knowledge". The vast majority of them are charlatans, so you should avoid them so as not to "stupidly be hoodwinked and to have been cheated out of one's own money." But some have "actually been able to get in touch with negative forces" and it's never done for the benefit of the people.

It works against this "to have a fundamentally sincere reverence for sacred images and objects," said Amorth. "Decisive" it is "that in everything and for everyone that the answer to all our questions can only be God, because all things were created through Him and to Him," warns the exorcist of the Diocese of Rome.

*Gasp!* You mean I have to give up my mandela class and yoga lessons? What about walking the labyrinth? If I give that up...how will I ever find my inner self and tap into the power of the cosmos? And what about the reading I have scheduled with Teresa Caputo! I'll have to cancel. Now I'll never know if she can channel my dead goldfish. And my circle of life garden! The spirits of the echo system were beginning to speak to me! Can I at least still say Ommmmm and pray with my palms up like I'm checking for rain?

Louigi, Is that Holy Yoga? I bet you don't have time
for Liturgical Dance lessons. Oh yeh. You can just
make that up as you go. Living dangerously.

Mrs. Louigi, I am not Italian but my advice is that
you put a stop to all Louigi's dabbling. Otherwise
an exorcist may be needed and that is no joke.

Mrs. Louigi, I meant to say, I am not Italian but
I am Roman!

Doesn't Father Amorph feed into the Medjugorie nonsense? Seems I read of that somewhere.

Yes, he does, but he's still right here.

Yes, but is not the Medjugorie deception is of the evil one?

I think it's absolutely false and the people surrounding it are charlatans.

Even though Father Amorph is dead on accurate in his warnings against opening doors to evil spirits, I find it troubling that he could fall for what is obviously of the devil in Medjugorie. How could he be so blind to it? To be fair though, his area of expertise is of demonic possessions, not human chicanery. Still...it should be pretty obvious to anyone with even minimal knowledge of Guadelupe, Fatima or Lourdes that there is nothing of Heaven taking place there. Like I said I find his belief in it to be troubling.

He really likes, and uncritically in my opinion, Pentecostals... unfortunately.

Perhaps it is because he is a holy exorcist that demons target him. Always pray for God's servants.
I have become a better Catholic, more hopeful and with
more strength in the struggle against extreme cynicism
by reading the Eponymous Flower. Tancred sometimes says, " I try to see the glass as half full". I've come to embrace this. I've come to pray for Tancred
and his dearests too.

Oh Oh no. I don't know much about Pentecostals reall;
only I guess what you might call the obvious. I suppose they are dispensationalists. I have lately been somewhat focused on dispensationalism, Protestant
fundamentalists, Dual Theology. The reason is to my great dismay even horror at couple of Catholic Sites and blogs I've visited seem
to be involved in some of this. I suppose almost
everyone know about Catholics who now accept dual theology but it's the inch and the mile thing. Some seem to joining in the fulfilling prophecy movement.
Sometimes I get angry at them.

dear Moderator, If you don't mind, will you go to North Face Search which is on your blog list and see if it exists?
It did three days ago. I will be grateful for your help.

I just, 5 minutes ago revisited an Eponymous Post, Dec. 19,
2011 titled A Crusade for Birettas and Latin Mass Readings.
A good Post. Kreuznet. It began, Birettas and Latin Mass
Readings is more promising of success and more pleasing to God and for more winning of souls than a Crusade against global terrorism. Presently your Prayers for Muslims Posts
are very good. Now, Your are generous to your blog visitors
if they aren't just plainly obnoxious. Do you have a reason for not replying to my inquiry about North Face Search where they are on the Crusade against Global Terrorism and
where they never say a word about things like Birettas and Latin Readings, Latin Masses and really not much about Catholicism though they or she say/says they or she are/is
Catholic. The blog is not available to me. Is it to you?
I really don't know much about the technical Internet. I just know how to read and write. Oh, and think. yours truly
in Catholic friendship .

No, I can. Sorry, but I'd missed your question. I think the blog is private.

I could go into a history of my visiting that blog but I won't just now. But I may e-mail you or may bring it up in comments if in any way pertinent to a Post here. The blog is
"Israel Right or Wrong" in the extreme. U.S. "No daylight between us, Israel Right or Wrong"in the extreme. I have visited the blog
in the past fairly regularly but bye and bye less regularly
because the blog and the marie therese irritated me in the extreme. Both the one side only propaganda and the gatekeeper marie therese who did the dismissal by deletion
policy to the extreme although I am never Never obnoxious as
it is not in my character or personality. I only ever stated
facts and opposition to the perpetual war on terror drumbeat. Through months I literally only saw comments from
-me- and one time from schmenz always almost all in short course deleted. I could always access the blog until
4 05 5 days ago. As I said I am not much informed about
internet mechanisms beyond those that I use which are pretty
much reading and typing and sending. Thanks for responding.
I don't know how blocking an isp works, because millions of people have the same isp. I thought only government spy agencies and hackers could identify an individual pc user.
As I said I don't know about all this. I hope I'm not supposed to be embarrassed. Tsk tsk. I appreciate your taking the time to reply.
The marie therese blog is the only site that this has ever happened to me. I could very well be wrong but I think she is a Hebrew Catholic directly or ancestrally. This is well and good of course if one is through grace and devotion Catholic first.
yours in Catholic friendship

I think that woman was really nice and everything, but that sounds familiar. I never spent much time over there, and it looks like she created a post about her anti-Semitism obsession.

She sounds a bit paranoid to me, looking for anti-Semites under every rock.

I can affirm from my experience there over months, close to a
year that she is obsessed with looking diligently and persistently. I can't interpret her motive on suspicion. But there are indications by her obsession, Links, Blog Highlights and her personal profile (interests,, geneaology)
taken together indicate Jewish heritage, perhaps Spanish.
I once politely asked if her geneaology is Spanish. One of the rare times she replied though I was the sole commenter
almost ever, her reply, Catholic West Texas. I could go on at length but... . But it has occurred to me that whatever
the mechanism she probably had no problem at all blocking
me as I was the only person whoever read the blog save schmenz one time and an anonymous one time, to smart mouth
me for being an anonymous troll. I gave a short reply and added my name. Funny thing that anonymous appeared to be marie therese.
That is when she blocked her only apparent reader,
me.