Edit: as Galliawatch says, translating from Le Salon Beige, there are numerous reports coming in of people being arrested for wearing the Manif Pour Tous colors and logos. The desperate Socialist government of France is entering a new level of hyperbolic paranoia as it attempts to curb the growing discontent with its social engineering and inability to heal the ailing economy. 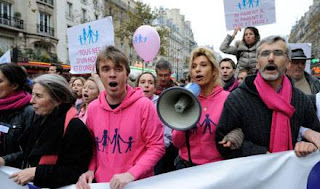 A woman was arrested tonight at place du Trocadéro, as she was driving home from the demonstration. Her crime: a flag of the Manif Pout Tous was waving on her car. As he questioned her, the police officer admitted that his orders were to stop any car sporting the colors of the Manif Pour Tous.

It seems to us that you’d have to be a particularly robotic servant of the state to obey these ridiculous, and apparently illegal, orders.

Does Bishop Pontier Freemason have anything to say about enlightenment. fraternity, the good and progress for humanity ? The Craft .

I’ll bet he’s been as silent as the tomb.

That Bruvver Eccles, he's a card inn'ee? That red hat 'n all.