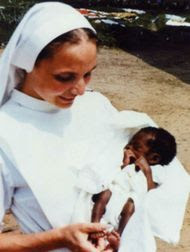 (Rome) on Sunday opened Bishop Edward Mununu of Kikwit in the Congo, the beatification process for six Sisters of the Poor (SdPIP), who died during the 1995 Ebola epidemic, because they cared about the most dangerous virus sufferers.

"A life given out of love," with these words, Bishop Mununu outlines the self-sacrifice of the six Catholic nuns who died in April 18 years ago within one month. The sisters Dinarosa Belleri, Clarangela Ghilardi, Annelvira Ossoli, Floralba Rondi, Daniel, Angela Sorti and Vita Pink Zorza worked at the mission station and school of their order in the Congo. Following the charism of their order's founder, the blessed priest Luigi Maria Palazzolo (1827-1883), they have been for the poor and disenfranchised ever since. In 1952 the Sisters of the Poor had taken their apostolate to the Congo and persevered even during war and civil war, with the violence and looting, marauding militias.

In 1995 an Ebola epidemic broke out in Kikwit in the province Budundu. Ebola is a virus almost always deadly, discovered in 1976, and named after the Congolese river, on whose banks the first major epidemic was known. Features include a high contamination rate and a very high death rate. In the 1995 epidemic, 81 percent of those infected died. Among them were also the six sisters who stayed with the sick and they wont.

Bishop Mununu described the concrete act of charity to the self-emptying also from the testaments that were left by the sisters. They give information about the spiritual dimension of their service, which the Sisters of the Poor in the Democratic Republic of Congo contributed to the sick and needy. Sister Dinarosa wrote in her diary, after she had learned to have been herself infected by the Ebola virus, "What has my Founder done? I'm here to follow his example. I am here to serve the poor. The Eternal and Merciful God will help me.”

The memory of the selfless devotion of six sisters is alive in the area of ​​Kikwit among the native population. Their story is retold by the people with great respect and recognition. Meanwhile, the book The Last Gift, which was published in cooperation with the General House of the Order in the northern Italian city of Bergamo.

The affection of the population in Budundu is clearly evident in numerous names that are given to the sisters, when you tell them: "Women of Life", "mothers love" and appreciative pet names like "old mothers", which marked in the matriarchal thinking a recognition of rank. The Congregation of the Sisters of the Poor, founded in 1869 is numbered at more than 800 sisters today. The charism of the Order comes in a saying the Founder Don Luigi Maria Palazzolo expressed that serves the Order as a mission and motto: "I am seeking the rejection of all others, for where the others take care of themselves, they do it certainly better than I could, but where the others do not get there and do not care, there I try to do something as best I can.”

Along with the opening of the beatification process by the Diocese of Kikwit, the Bishop of Bergamo, Monsignor Francesco Beschi opened an investigation to collect documents and testimonies for the process in Africa and ensure that they can be examined by the competent ecclesiastical authorities.

THIS is what religious are supposed to do. Can you in your wildest dreams imagine the old polyester pantsuit "social justice" butch "sisters" ever risking their lives to care for people dying from a contagion??? NEVER!!! Like all Liberals they are selfish and only love themselves. But not these selfless, sacrificing NUNS who lived out their baptisms and were faithful to the religious life which is one of SACRIFICE. In this respect it is exactly like the priesthood.

Even the most popular online dictionary uses the graphic of a nun and a priest on their definition page for the word "selfless". http://www.thefreedictionary.com/selfless

I hope their story is spread all around the globe. What a good and holy example these nuns are to young women today.

These good Nuns are among so many good and holy religious. At this past week-end I saw a part of Global Showcase on "YIKES!" EWTN called Interrupted Lives. It is about a number of nuns in the former eastern-block who were suppressed some tortured and imprisoned. These brave and holy women stayed true to God and to their vows. Many survived and when communism fell these nuns were able again to wear their habits and resume their vocations unhidden.
They very unlike in so many ways,
the LCWR and their flock, look like Catholic nuns-female.

God. Doesn't believe you should show hate and division. Which your comment does. It is false.

Not sure how it does that. Do you speak to God perchance? Apparently you speak for Him.