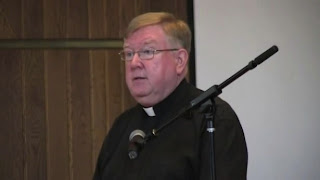 Yes. If he cannot reconcile himself to the Faith of the Church then goodbye. If he insists on pursuing perversions perhaps he can have a gay ole time over there with the Anglicans.

What he really needs is to be sent to Silver City, NM to spend a month with the holy Benedictines there. He would soon learn the error of his ways and have a profound conversion from all the graces he would receive merely by being in their presence. Maybe he would be given an exorcism. An enema wouldn't hurt either.