Update:  Harlem Shake has been cancelled, but instead of announcing the resignation of the priest, the Vicar General of Regensburg has said that a discussion will be held in the church instead.  As one commenter said, why does this “discussion” have to be held inside the Church?

Edit: your trusty SSPX is ever vigilant for these kinds if things to help other Catholics who are faithful to Rome in the former Diocese of Archbishop Mueller.

(Piusinfo.net) Pastor Michael Hirner of the Catholic Parish Church of Herz-Jesu in Teublutz (Diocese if Regensburg) is planning a desecration of its church.
On Facebook, the youth are called to get costumed and come to church on the 16th of March to dance a "Harlem Shake" (see photo) .

Here is a public invitation by Pastor Hirner on FB:

Harlem Shake – Saturday 16. March 2pm, Teublitz Parish Church. We're going to do a Harlem Shake in the church. We will hold liturgy, in which the Harlem Shake will be danced. – We'll need a lot of participants for that - It would be really super if many could come. – Important!!!! Please bring masks and costumes of every kind along. We want to make a video and put it on YouTube.–

The Facebook site can be seen here as it is depicted. 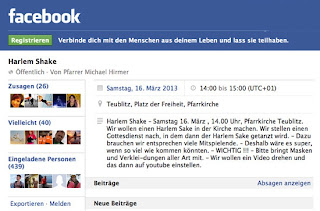 As for the question of Pius.info readers who might ask, "what is a Harlem Shake?"

Harlem Shake is a song with elements of Hip Hop and Trap Scene. This song, available for free on the Internet since 2012, is connected to this phenomenon:

In February of 2013, there was a video in which a part of the Harlem Shake can be heard in this example with 40,000 views:

Accordingly the course of this view is always the same: thus the video always runs the same course: a group which appears accidentally together (flashmob), which goes along in a relatively bored way on the usual activity, z.B. for example students in a classroom. Suddenly grotesquely masked youth begin to dance to the music of Harlem Shake, and in the next scene one sees the group dancing in jerky movements to the music.

Pastor Hirmer wants to conduct this clearly in the church. That will also involve the desecration of the church space at the same time.

We ask your support:

Write only in a polite and respectful way (despite Fr Hirmer's scandalous intentions)
Schreiben Sie wie immer höflich und nicht verletztend and point out this sacrilege.

Also contact the Diocese of Regensburg to inquire about what those responsible intend to do: 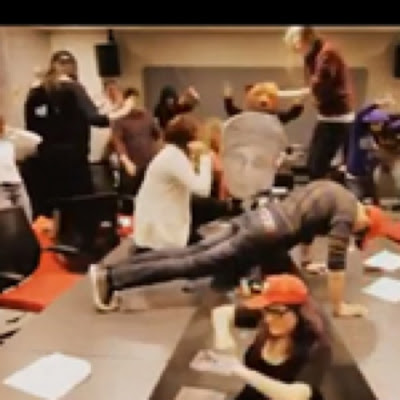 This form of "dance" (if that's what you wish to call it) has its origins in voodoo. a negro pagan ritual which was fought by the missionary priests when they encountered it in their many travels. It is well-known in America, and no matter how repulsive or silly the actions are of the dancers it seems to attract the young of other races.

Funnily enough, if you watch the superb 1943 thriller I WALKED WITH A ZOMBIE you will see authentic recreations of this ritual, and you will be amazed at how closely it resembles the gyrations and frenzies of its current practitioners in the "hip-hop" scene.

Not so funnily enough, it now seeks to infect Catholic worship, under the auspices of priests and Bishops who are either clueless, just plain stupid or sly revolutionaries. These ecclesiastics who encourage or allow this should be horse-whipped.

Many Protestant youth groups here in America have been using this as a way to attract the youth. I wondered how long it would take before it somehow made it's way to infect Catholic worship. I don't know much Spanish...but I can translate the words of the song used in many of the 30 second YouTube video's: 'con los terroristas'.. Tell me how this makes sense anywhere in the church or among God's people.

Thanks for posting ...Blessings +