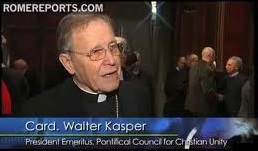 Edit: we were reporting earlier that we’d hoped that Cardinal Kasper had turned away from his Old Liberal ways as a protege of the dissident Hans Kung.  He not only kept mostly silent, but moderated many of his former opinions, even encouraging his fellow Germans to obey the Holy Father at one point.
Now the wily Conciliarist smells blood in the water and is leading the progressive bloc in the Council to elect at least a man they can manipulate to further their agenda.  Here’s the translation from Giuseppi Nardi and his interpretation, which is very perceptive:

(Rome) Cardinal Walter Kasper, will participate in the conclave, though he is 80 years old, in two days. He will thus be the oldest papal elector. The German Cardinal, the most weighty representative of the progressive cardinals, is spinning the threads of an anti-Ratzinger Pontificate.
The former assistant to Hans Küng was removed in 1999 by John Paul II as the Bishop of the Diocese of Rottenburg-Stuttgart and transferred to Rome, where he was until 2010,  the President of the Pontifical Council on Promoting Christian Unity. The promotion was part of a smooth reconstruction of the German episcopate by repression of the progressive influence. As a "minister" of the Holy See, Kasper moderated his attitude, although he had not abandoned it. Within the Roman Curia, he was theologically the real opponent of Benedict XVI. Since his resignation announcement, it was difficult not to see the Cardinal as the most important representative of the progressive camp to advance amid the Conclave participants. It is a direction that is no longer numerically  great among the electors, but looks for allies.

Assistant to Hans Küng as head of the progressive cardinals

Little surprise, then, that the Left-Liberal Italian daily La Repubblica [They also do Vatican Insider] asked the Cardinal for an interview. That paper, which published the dubious rumor  by an allegedly scandalous shocking content of Vatileaks-final report, which allegedly prompted Pope Benedict to resign. The unproven sex-crime-and-Vatican rumor was spread worldwide. La Repubblica is currently one of those papers of similar political alignment that try to significantly influence the conclave from the outside.
The newspaper asked Cardinal Kasper what he would say to  Benedict XVI,  when he visits him after the conclave. The Cardinal did not  too shy to announce through the media today what he would eventually intend to say in person to the former Pope, but in any case, still Pope.  It’s hard to imagine less respect. Kasper's remarks reveal a certain nervousness that in Benedict XVI. the Cardinals could recognize maybe a preferred candidate to succeed him, or at least to prescribe and influence the  who his successor will be.

Kasper's response thus acts more on the conclave, then an imaginary conversation with Benedict XVI. after the conclave disguised as a "piece of advice" which corresponds to more of a warning. So what would the Cardinal tell his German compatriot?

"Many things. The first is a piece of advice. I would recommend him to let himself be used by anyone.The danger is too great that the church leadership suffers his influence. This must not happen. He has made his clear decision that requires a step back. He must, therefore, impose restraint. He must avoid to relate questions that church leaders and church politics to interfere. Then I would still be friendly with him, talk about what we both care about the most, theology. "

The newspaper stressed then that the German Pope, especially in the local church, sees an authoritarian figure who dictates from above, which is why in Germany particular worth is put on independence from Rome. As to the question of whether Kasper also sees it this way, the Cardinal contradicts, but rather calls for an unspecified democratization of the Catholic Church to Protestant model:

"It takes a new form of exercise of church leadership. This form is called collegiality, a more horizontal government. The collegiality of the bishops must extend through forms of representation to all parts of God's people. Such collegiality would go in the direction of the Second Vatican Council of the unity in diversity among all who believe in the gospel and greater dialogue with other religions. It is necessary to get away from the dryness of Roman centralism by the conviction that the center does not mean centralization.
The reform of the curia is a priority. At the same time it is also a big problem, because today there is a lack of internal dialogue in the Roman Curia. The departments of not talking to each other, there is no communication. This situation is changing.
In the General Congregations, we have not talked about Vatileaks. I think that the Curia should be revolutionized, and generally independent of Vatileaks. I believe that next to the word reform is a second word: transparency. The Curia must begin to stop fearing transparency. "

According to La Repubblica move "celibacy, women priests, homosexuality [...]" the conscience of many believers back "issues" with emphasis in the public debate. " Cardinal Kasper also contradicts not a word in this case, if it is received in its response on another keyword:

“The banning of remarried divorcees from communion is a wound. I will not pretend to the previous track, but one thing is certain: there needs to be serious rethinking on this issue. It takes humility to approach the argument from case to case. The determination can be changed according to the diversity of the situation. "

Cardinal Kasper expresses no preferred candidate as the next pope: "I wish that there is no objection to anyone. We have to be open to everything, for every nationality and every geographical origin. "

Brazilian bishops have called on the progressive media, to create the right atmosphere for Cardinal Schemer

Meanwhile, it was revealed that large movements are in progress, the Archbishop of Sao Paulo, Cardinal Odilo Scherer is being brought in camp as a candidate of the “Left" position. Movements, in which the progressive classical types as Lehmann and Kasper, are connected. As at the largest Brazilian newspaper Folha de Sao Paulo reported on the  5th of March, the Brazilian Bishops' Conference has not only called the cardinals of the largest Latin American country to vote for Scherer, but also specifically asked the progressive mass media to create the right atmosphere for the election Scherer.
It is not only the ten percent of the old progressives who gather around Scherer in the conclave, but all “Liberal" cardinals who believe that the reconstruction of the church by Pope Benedict XVI went too far. Thus  an anti-Ratzinger successor is  secured to cancel the pontificate of Benedict XVI  in its "restorative" parts.  The alliance, which also includes parts of the Roman Curia. Those Curia who were, under Pope Paul VI and John Paul II, were greatly enhanced by a number of new councils, academies and commissions. The heads of some departments want to live a life of their own as much as possible, which is why they are traditionally interested with the progressives for a weak pope, which Cardinal Kasper indirectly expressed. Those who know him are convinced that Cardinal Kasper thinks there is a plan B  next to Scherer.
Text: Giuseppe Nardi
Bild: Screenshot Romereporters

For comments and corrections: vekron99@hotmail.com

Thank God for Cardinal Kasper. He's an intelligent, reasonable, and more than decent man of God. We need more cardinals like him (especially so that one of them can become pope) - we all wish him luck.

Woe to those who try to politicize and demonize the Catholic Church; whether it be coming from the media or from Catholic laity and clergy! It seems from this article that Cardinal Kaspar wishes to change the truth that Jesus Christ has established. If this is so, then woe to Cardinal Kaspar!

He is a common catholic apostate who should be ejected immediately from the priesthood.
If he persists publicly in his anti Christian rhetoric he should then be excommunicated from the catholic church.
His presence as a cardinal in the higher echelons of the catholic church is a total scandal.

Cardinal Walter Kasper is a heretic.

The current pope speaks warmly of his theology.

The current pope is totally indifferent to the evil effects that heretical prelates like Card. Kasper and Bishopo Nunzio Galatino bring about.

I do not know why this is and amongst other matters has caused me to suspend trust in Pope Francis.

Permitting the true church of Christ ie the catholic church to be formally
polluted with the public heresy of the above mentioned bishop and cardinal is a real scandal.

Why has Cardinal Kasper not been publicly excommunicated. Why would the pope endorse even tacitly some of these heretical ex-catholic prelates (there is such a thing as ipso facto excommunication for denial of even one dogma) and seem to punish only conservative and traditional prelates.

Hug the homosexual friends and then deny approval of the actions of a protestant women who was imprisoned for refusing cooperation in same sex marriage which should be commended by all Catholics.

The Church seems to have sprung a leak and is quickly being drained of any common sense so that they don't even appear to be seeking holiness or the will of God. It's like listening to politicians all with their own personal agendas.

I have become suspicious of the pope's intentions. I hope I am wrong please God. The only comfort is that if he proves as heretical as Kasper we already have a pope that is reasonably traditional in Benedict 16th.