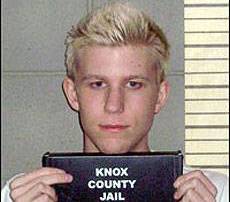 Adam Flanders is a Maine homosexual who in 2008 sexually assaulted a minor and attacked his father with a knife.  Since then, Flanders has been attempting to get a letter he wrote against a local homosexual youth group, accusing them of promoting sex with minors in 2007 on Pro-Family MassResistance.org, and is recently had a civil suit against them for the amount of 1 million dollars thrown out, as reported by LifesiteNews.

Interestingly, Flanders attempted to relativize the abuse, citing a police official who described his offense as "stealing a candy bar" during an interrogation.  The police official distanced himself from Flanders by saying that during an interview, it is standard procedure to sympathize with the accused's point of view to obtain a confession.  He would not himself describe Flanders' criminal behavior in those terms.

In addition, the cowardly 'vimeo.com' has removed hundreds of videos posted by Road Kill Radio without informing them, including one pertaining to Mr. Flanders. Clearly LifesiteNews, Mass Resistance, Sun News Network and kreuz.net, have done a lot to raise the profile of this deplorable bullying on the part of homosexual groups and their allies.

Vimeo has since reversed its decision and has restored the videos on line with the help of Kill Radio's legal representation.

Here's an interview with Brian Camenker, who was being sued for $ 1 million.

We'll post the video as soon as it becomes available.
Posted by Tancred at 9:19 AM