In Ukraine Two of Three Applicants to Seminary Are Turned Away 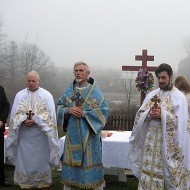 (Lemberg/Lviv)  Half of the applicants for entrance in the west Ukrainian seminary are turned away because of a shortage of places:  In the Ukraine it is not the exception but the rule.  Jaroslav Pryriz, the Auxiliary Bishop of  the Greek Catholic Eparchy of Sambir-Drohbytsch, explained in Konigstein at the international headquarters of the Pontifical Aid Agency, Kirche in Not [Church in Need], that for every seminary place in the Catholic part of Ukrain there are three applicants.  In several parts of western Ukraine two out of three applicants are not accepted in the seminary, because the Bishops and the regents of the seminary don't know where they can accommodate the large number of young men in the seminary, who feel themselves called to the priesthood.

Since the collapse of Communism the number of applications has grown steadily.  The Bishops of the  Ukrainian Greek-Catholic Church united to Rome have introduced strict standards for selection.  Every applicant has to undergo four acceptance tests.  Only the best will be taken, so long as there are places available, and they are much too few, says Auxiliary Bishop Pryiz.

Already in 2001 Kirche in Not published the documentary film  Die Saat des Glaubens about the growth of the faith among Catholics in the Ukraine after the end of the Bolshevist dictatorship.  The Greek-Catholics untied to Rome celebrate the Liturgy in the Byzantine Rite.  They are concentrated in the western parts of Ukraine, which belonged up until the end of the First World War, to the Austrian Empire.  Since 2011 the Senior Archbishop Syjatoslav Schwertschuk of Kiev and Halytsch is at the forefront of the Greek-Catholic Church of the Ukraine.

The relations to the Russian Orthodox Church is traditionally tense.  The Catholic Ukrainians are considered by the Orthodox Church because of their union with Rome as apostate, although in the 16th century they did not join in complete union with the Moscow Patriarchate.  During Communism, all Greek-Catholic churches were confiscated and -- as far as they remained churches -- were given to the Orthodox.   Historically -- if also from other grounds -- there was also stress in the relationship between the Roman Catholic Poles and the Orthodox Russians.  Through a common declaration of the Patriarch of Moscow Kyrill I and the Catholic Primate of Poland, Josef Michalik, an easing of tension was reached.   The Greek Catholics of the Ukraine also hope and wish the same.   Archbishop Schewtschuk explained on August 19th:  "It would be my deepest wish, that something similar will also take place in Ukraine.  I've already stated this many times.  It would be very pleasing to us, if personal dialog on the level of our Churches could take place, so that the Patriarch of Moscow could recognize the UGCC as his dialog partner.  Because till now, we are talked over  to the Holy Father in the Vatican, and really it's always without us."

Does anyone have any details for which diocese or person to contact for this? I work for an organization (Serra International) which tries to fund vocations. If there isn't enough room, we will find it or provide for it. Does anyone have a contact?

Here's an e-mail and individuals at "Kirche in Not" to contact. They are working extensively with the Ukrainian Church.

I believe that CNEWA is able to help support seminarians in Ukraine and that they have a seminarian support program.