Palpable Shift to Old Liberal Decadence in the Vatican

Edit: Here's a kreuz.net which entertains the point of view that the palace conflict surrounding Vaticanleaks has yielded these Old Liberal appointments.

Qualified Capitulation:  The Pontificate of Benedict XVI. is crumbling beneath the blows of the Old Liberal document thieves.  Benedict XVI has enraged Catholics this week with  scandalous appointments.

(kreuz.net, Vatican)  The Regensburg  Heresy Bishop with a problematic character, Msgr Gerhard Ludwig Müller, is the new Prefect of the Congregation for the Doctrine of the Faith.

The Reform of the Reform isn't present


The Vaticanist Andrea Tornielli spoke last week about this, that the Pope has shuffled the cards in a "less conservative" way with the recent wave of appointments.

In other words:  The Old Liberal decadence has returned to the Vatican.  The much praised Reform of the Reform is not among them.

Tornielli has described a "deadlock" in the Catholic wing of the Roman Curia.

Benedict XVI has returned to the prudent opportunism which has guided him his entire life.

A replacement for the in the meantime very weak Secretary of State, Tarcisio Cardinal Bertone, is not anywhere on the horizon.

Catholic he is not

The new President of the Papal Council for Family Bishop Vincenzo Paglia is described by Tornielli as an Ecumenist.

He is especially attached "to the poor".

In ecclesiastical political terms Msgr Paglia is clearly in the Old Liberal camp,.

Is this what the Pope means by "Reform of the Reform"?

The new Secretary of the Congregation for Liturgy, the English Bishop Arthur Roche is seen by Tornielli as a "modern Bishop".

He is -- as ever --- a proponent of the Pastoral Council and has "surely no traditional program".

The well-known English blogger 'cathcon.blogspot.co.uk' published a negative opinion of him in 2009. [A member of the Magic Circle]

For the new Secretary of the Liturgy Congregation as the Breakaway Bishop of Leeds had closed down many churches.

He is an enemy of the Old Mass.

His episcopal chapel consists of a supper table in the middle of the room with a blue upholstered television chairs around. 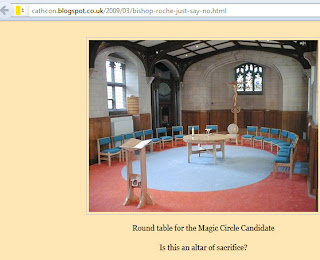 WEDNESDAY, JULY 4, 2012
CDF THERE ARE TWO INTERPRETATIONS OF VATICAN COUNCIL II - YOURS IS THE FALSE ONE
http://eucharistandmission.blogspot.it/2012/07/cdf-there-are-two-intrpretations-of.html#links