Who can wonder?  In the area of sadomasochism the German cringer and Church-persecutor Bishops have no limits. 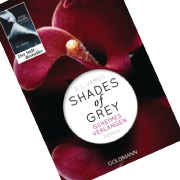 (kreuz.net, Augsburg)  Since the 9th of July the English publication of  the pornographic "Shades of Grey" is available in German.

The private fantasies of a house wife

The author of the book is Britin Erika Leonard (49), who is also known as E.L. James.

She is the mother of two sons and worked briefly for a television broadcaster.

Time Magazine indentified Mrs. Leonard in 2012 as one of the 100 most influential people in the world.

The more primitive, the better

From 2009, Mrs. Leonard published her tripe on the Internet.  The it appeared in a small publisher in Australia.

Since April she has been operating from a US publisher in grand style.

In English there are already 10 million copies that have been sold.

The millionaire was abused as a child and is psychologically disturbed.

The book excessively describes the violence, with which the student is inflicted.

In German the book is also available from one of the affiliates of 'Weltbild'.

At the same time the publisher has distanced itself then as it writes in its website:

"The description of the oppression women in this book is contrary to the world- and human image, which we want to portray as a book seller."

This hypocritical distancing will hardly interest anyone.

On the website of 'buecher.de', which belongs to 'Weltbild' in any case, the tripe is available without a hypocrisy warning.

Slaves of the Market

A speaker of 'Weltbild' sees that her publisher for the Old Liberal 'Katholischen Nachrichtenagentur' (Catholic Information Agency)  is in a dilemma.

The sadomasochistic book is 'omnipresent' on the market.

'Weltbild' will not promote the title and its distribution in any way.

They have distanced themselves from its content and given critics room.

But it will be sold all the same.

the more the Catholic Church involves itself in the world media, something which is inevitable, the more the opportunities for bad entanglements multiply; the hyerarchy should focus on choosing guardians as alert, attent, thorough, and objective, as was (now Pope) bishop Ratzinger as watchdog of the Church. I know one scoundrel priest who is very much pro-anything that opens up the Church to the New Age; he curses and chuckles when he remembers his days at the Roman Theological Seminary, when they were cooking up their "Church reforms" and then Ratzinger arrived and spoiled their party.