Enemies of the Church Don't Shrink From Using Violence

Not a Synagogue?  That's ok, then.

The hate filled media pogrom against the Church is bearing fruits:  In NS-Germany a Church is repeatedly damaged on different occasions.

(kreuz.net)  A view at the desolation greeted the visitoors on Thursday to the Catholic church oof St. Micheal in Oberndorf. 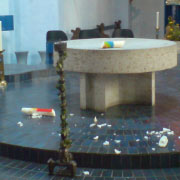 This was according to the website 'schwarzwaelder-bote.de' on the 18th of May.

Oberndorf am Neckar is a 14,500 population city in the vicinity of Rottweil in Baden-Wurttemberg.

In the Holiest Place

Unknown perpetrators raged above all in the altar space. (not really a sanctuary)

The Easter candle lay broken into individual pieces and strewn all over the floor.

There are two large puddles in the altar space.

The criminals sprayed water from spray cans taken from an adjoining room and in various places water was poured from the Eastern water font.

Were the Perpetrators Minors?


The church was attacked just before Easter.

Then one of the church vandals trod on an altar cloth and left a foot imprint.

She suspected that the crime had been committed by minors.

Vandalism Even DURING the Liturgy


Miss Dlugosch regularly appears in a grey alb with a green stole as a sash on the altar.

In this attire she plays the Deacness or standing co-celebratrix.

At the changing of bread and wine, she stands with her hands folded inclining herself in the direction of the altar.

Not to make light of church vandalism (which is going to get a lot worse quite soon), I can only wish that they had completely destroyed that hideous "altar".

The womanpriest inserting herself in the Liturgy is actually worse than what these minors are doing.

Why dont they attack synagol, temples, mosque?ect.of other religion?
Who is using eithiests to attack CC??