Alois Gluck: The Pastoral Council Has Broken With the Mass 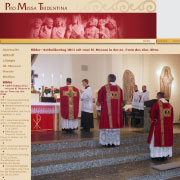 The Peter Priest Bernard Deneke is speaking against his slander, which has been disseminated against him by quality medium 'Südwestrundfunk'.

For that reason he was decked by the public broadcaster 'SWR' on Sunday with a pan.

According to reports from 'SWR' Fr. Deneke described the Old Mass in his sermon as "the only true form of Mass celebration".

"He is in horror of a normal church service,"  stated the broadcaster.

Father denied this today at 'gloria.tv'.

He had never made the statement ascribed to him.

The minister was preaching, as to how the faithful connect through the sacrifice of the Mass and Holy Communion with Christ, the vine.

Alois Gluck -- the President of the Central Committee of German Catholics -- was allowed another false report in the same 'SWR' broadcast.

The poorly informed man insisted that the Old Mass celebrated by Father Deneke did not take place in the context of Katholikentags.

In reality the Mass was announced in the program.

And still another false report

Gluck also said that the Parish of Maria Hilf in Mannheim "in any case" celebrates the Old Mass.

That is also false.

Because there are no regular Old Masses in Mannheim.

Gluck falls into the abyss

Finally Gluck explained that the New Eucharistic celebration had broken with the Holy Mass introduced by Jesus Christ.

The Old Mass is a rejection of the Pastoral Council -- for those whom the Mass was celebrated -- and it has "for that reason" no place in a Katholikentagsprogramm.

If that is right, then the contrary is also true:  the Pastoral Council has broken with the Mass of all Times.

Email ThisBlogThis!Share to TwitterShare to FacebookShare to Pinterest
Labels: Katholikentag

I'm a diocesan priest who has known Fr. Bernward Deneke for 25 years. He just wouldn't say these things, and it's hard for me to believe the malice of someone who would claim he did.