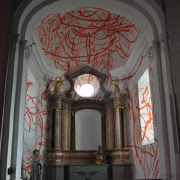 The first thing the faithful will see in the magnificent baroque church is not the altar painting, rather the doormat with two gaping holes.
(kreuz.net, Vienna) Since December 1999, Pastor Hermann Glettler has been destroying the parish church of St. Andre in Graz in southwest Austria.
The diocese of Graz-Sekau is currently being led to the wall by Bishop Egon Kapellari.
Fr. Glettlers church originates from the 17th century. It was built by the Dominicans and consecrated in 1635. 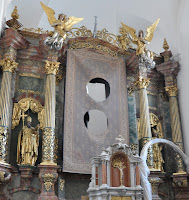 Wolves in Human Skin
The interior of the church looks as though kindergarten had run wild within it.
In front of the baroque high altar there is an example of a supper tale, which is made from mirror shards.
Next to it there is a wire stand with a glass plate. The thing is used as a podium.
On the church windows there are bright areas, which have distorted letters or -- more pointedly -- wolves in human clothes.
The white wall of the side chapel is smeared above with orange scribbling.
Aesthetically destroyed
Fr. Glettler was emboldened on his website with the idea, that he would consider to challenge "new artworks" .
They put the old state of the church in "a new light".
In any event the clergyman says that there's been an "aesthetic breakdown" with his art.
Profound Facade
In 2010 the facade was newly renovated.
In the course of its new formation, a Graz painter wrote various slogans on the exterior wall.
In various scripts, colors and sizes one can read profound things like "It greens so green", "tobacco", "nasty surprise", "Mozart", "sun flower", "sheep herd", "scale" , "park", "locksmith" or "lady slipper".
Altar Carpet with Two Holes
During this Lent, Pastor Glettler hung a self-cut lenten cloth over the high altar.
It is an old carpet in which Pastor Glettler has cut two holes.
It gives a clear view of the round window behind the high altar.
The chopped carpet should " challenge the expectation that an altar painting will be ordered" -- it says in an explanation.
Posted by Tancred at 1:58 AM