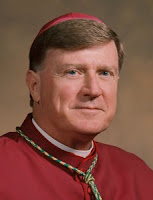 Edit: this is one of those rare bishops who doesn't look and act like he reads Vanity Fair more than his breviary while subsisting on a vegetarian diet.
By Margaret M. Russell
[Catholic Free Press] There was no wealthy conservative Catholic pressuring Bishop McManus to object to Victoria Kennedy as the commencement speaker at Anna Maria College.
There was no threat by the diocese to cut off financial support for the college. The diocese does not fund the college in any way.

But, Bishop McManus did tell Anna Maria President Jack Calareso that if Mrs. Kennedy were to be the commencement speaker that he would not attend the May 19 ceremony. That is consistent with the stance of not honoring Catholics who stand in public opposition to some of the teachings of the church, the bishop said.
And contrary to at least one published report, Bishop McManus had not known for a year that Mrs. Kennedy was to be the speaker. He learned of it only a month ago and had a frank conversation about it with President Calareso a few days later.
As a result, the college said in a press release Friday that it had officially notified Mrs. Kennedy that the executive committee of the board of trustees decided “with deep regret to withdraw its invitation to her to serve as Anna Maria College’s 2012 Commencement speaker and honorary degree recipient.”
As Bishop McManus sat down with The Catholic Free Press Tuesday to clear up some of the misconceptions surrounding Anna Maria College’s decision to withdraw its invitation to Mrs. Kennedy, another call of support came in to his office. He has heard from both supporters and detractors. Yet, unlike a politician who can be swayed by public opinion, Bishop McManus said that his decision to object to the college’s choice of speaker was informed by two church documents: “Ex Corde Ecclesiae” (“From the Heart of the Church”) and “Catholics in Political Life.” He said his duty is to protect the Catholic identity of the college.