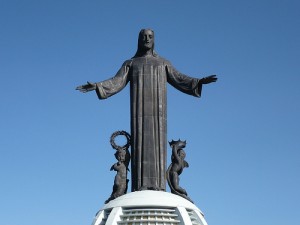 (Mexico City) After a moving encounter with children on Saturday evening on the Plaza de la Paz, Pope Benedict XVI's Sunday was dominated in Mexican Leon by something uncustomary for European ears, and a courageous commemoration of the anti-Catholic persecution and resistance of the Cristeros.  The Pope recalled and reawakened the threatened spiritual and  clerical roots of Mexico, which he stressed at his Angelus.  The threat also comes today "from the drug bosses, the crisis of values and criminality."

In a spontaneous action, the Pope received eight families outside of the official program, who had been victims of the drug bosses.  Despite the threats of some political parties, Pope Benedict XVI did not shrink back in fear from demanding religious freedom as a fundamental right.   Mexico is readying itself for its next election and the appearance of the Catholic Church's Leaders causes increasing nervousness for some parties and have brought blatant anti-religious emotions to the surface.

The Pope Recalled the Persecution and Struggle of the Christeros

Upon the "Angel of the Lord" the Pope recalled the anti-Christian persecution in Mexico and the armed struggle of the Cristeros, who fought for the freedom of the Church and religion in a bloody war 1926-1929.  Benedict's desired address breaks a central taboo in Mexico.  In political and public life in the Middle-American country it was virtually forbidden to speak of the horrific persecution of Christians in the previous century,  when the people were ready to name Christ their true Lord,  the Mother of God and to give everything.

"In the times of trial and of suffering many of you were called to be martyrs, who with the cry. 'Long Live Christ the King and Mary of Guadalupe' bore lasting witness to the truth of the Gospel and the devotion to the Church."  With the revival of the battle cry of the Cristeros "Viva Christo Rey! Viva la Virgen de Guadalupe", Benedict XVI impressed his special and completely unexpected stamp and broke a decades long taboo.

Bishop Conley,  Apostolic Administrator of Denver, wrote this, here.
Posted by Tancred at 3:39 AM