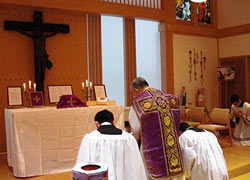 Translated from summorumpontificum.de....
Posted by Tancred at 7:50 AM

Not only are Catholics only 0.5% of the population nationwide, but they are actually much less than that in Tokyo, and on the whole island of Honshu. The country's Catholic population remains largely concentrated on the southwestern island of Kyushu, and in the vicinity of Nagasaki in particular.