Edit: a similar demonstration featured what appeared to be thousands of leftist whistling and throwing various objects at the German pro-lifers in Berlin, and even taking their crosses and throwing them in the river. These "Antifa" demonstrators are a good argument in themselves for the justice of the Church's position on abortion. 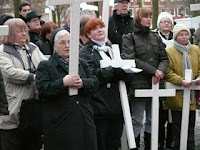 "fundamentalist opponents of abortionist stumble on 1000 crosses" -- under this motto the left radicals are planning to disrupt the 1000-Cross March on the 10th of March.


The organizations are the "Emacipatory Antifas of Münster", "Against 1000 Crosses" and the "Münster Association". At 2:00 about a half an hour before the start, the chaotists will enter the Aegidiikirche square. After that, around 7pm there will be a "Queerfeminist Concert with concluding party against 1000 Crosses" at the Münster armory.

In their call to arms, the leftist radicals aren't mincing any words: "For years there has been a so-called 1000-Cross March in Münster. At the same time, dozens march through the streets with white wooden crosses in order to protest for an end to abortion.  Even this year they want to march in the same week as the Nazi march at 10:30 to 2:30 meeting on the Aegidikirche.


These radical leftists are attempting in their declarations against peaceful pro-lifers to portay them as capable of violence.

It goes like this:  "The attempt to force women, to put their bodies in the service of "saving life"
fetus, is an expression of a violent association, which promise to degrade women to baby machines and deny them their conscience, convictions and self-determination. No one came up with the idea to portray people who refuse to donate blood or organs as murderers, which in this case would be a decision over what they do with their body as a fundamental human right.... Every cross of the 1000-Cross march symbolizes the the ostensibly the "sorrow" of the fetus and stigmatizes the woman at the same time, who has broken off her pregnancy, as a "murderer". The shaming on the part of Christian fundamentalists go then so far as comparing women who decide to terminate their pregnancies with SS-Extermination Teams in concentration camps... In the argumentation the self-described "Life defenders" show themselves in their demand, to rigorously deny women their self-determination over their bodies and their continuing life and to place them in the service of a society infused with force."


Without actually meeting such people, it would be easy to take such expressions as a joke.Actually one recognizes here, that they  actually take this grotesque ideology seriously.  It is naturally less an ideology, than the verbalization of an inner moral state, which is made up of hate and contempt, even against self.


We must not allow ourselves to be afraid, and must, despite these threats resolutely go  to the streets and step forward for the right to life of the unborn.