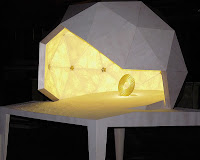 Link to Seattle's new "Catholic" Diversity Chapel.... It's so bad that even Mark Shea gets it.
Posted by Tancred at 11:37 AM