The time to rise from sleep is now:  thus, Benedict XVI can no longer continue to muddle through, otherwise the Vatican really will become the throne of the anti-Christ. -Kreuz.net 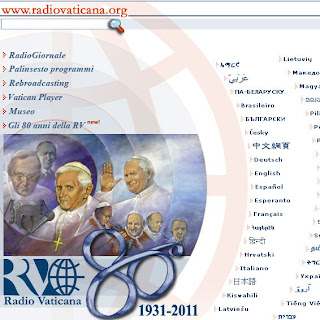 (kreuz.net)  Cardinal Francis George of Chicago has withdrawn a "derogatory comment" about a homosexual demonstration.

Radio Vatican -- which is supposedly the Pope's broadcaster -- made this defamatory comment from the homosexual perspective about the Archbishop's statement on the 21st of December.

What Radio Vatican described as a "homosexual demonstration" is in reality a desolate, exhibitionist and anti-child mob scene.

They were limited to marching in the morning by authorities in order to stem the customary abuse of alcohol.

A Homosexual Propagandist as Authority

The broadcaster cited a certain Anthony Matinez, portraying him as a "Director of a group for the rights of homosexuals".

With his "apology" the Cardinal was "exemplary" -- explained Martinez according to the news service.

Martinez is the director of 'The Civil Rights Agenda', authoritatively cited by them.  It's not more than two years old.

Martinez was active as a a propagandist for the introduction of the recognition of homosexual unions in the State of Illinois -- which was condemned by the Vatican.

'The Civil Rights Agenda' is a propaganda organization antagonistic to morality.

It fights for the spread of homosexual disorder, the destruction of the family and the infiltration of homosexuals in religion.

Last June Radio Vatican described a demonstration of 108 homosexuals in a mass pairing to simulate marriage.

On their website they are supposed to have directed a "aggressive PR-Campaign" against Cardinal George.

Radio Vatican failed to report on these details.


They have been an established reputation

That Radio Vatican has attempted to profile itself as an agent for homosexuality is new.

Otherwise, they have an established reputation as broadcaster of scandal.

In the middle of December Father Bernard Hagenkord SJ (43), the director of the German speaking section confessed that his broadcaster undermines the teaching of the Church:

"Critical voices get their say from us."

In February 2009 the Old Liberal Father Eberhard of Gemmingen -- the former Chief Director of the German section of the broadcaster -- attacked the Pope. He wrote:

"Many Catholics are disappointed by Pope Benedict, because they have gotten the impression that he has gone too far on behalf of a fascistic group."

In Jaunary 2007 the broadcaster insulted the Old Mass, which was then rehabilitated by Pope Benedict a half year later.


The only blessing: the gold hungry broadcaster won't have any more listeners with any luck.

Side note: Not one station in Chicago reported what homosexual protesters did to Saint Patrick's Cathedral in New York years ago. I suppose the media forgot....

Or the burning down of All Saints Church in Iowa by a radical homosexual.

He could probably use a better Communications Director, but then I thought the comparison was apt.

I don't think anyone has to work real hard to figure out why.