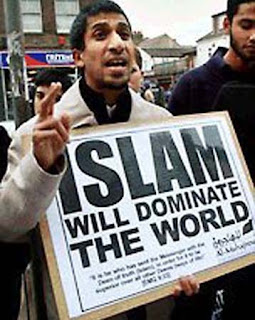 Edit:  now that English-born Muslims are outspoken, they're also far less likely to tolerate their children being beaten and sexually preyed upon by unsavory Muslim clerics.  Obviously, there will be a greater call for more government regulation.

But where's the bombshell and where are the highly publicized "crusading" attorneys with suspicious lobbying connections to Marxist hate groups moving in for the kill?

When will the keep the Imam away from my kids jokes start making the rounds in the West End comedy clubs?


[Press Association] More than 400 allegations of physical abuse at Britain's madrassas were made in the last three years, figures show.

But only 10 cases went to court, with only two leading to convictions, raising concerns over the extent of the abuse in the part time Islamic schools, a report found.

The figures, obtained by BBC Radio 4's File on 4 under freedom of information laws, showed tighter regulation of the schools, which take up to 500,000 students a day in England, Scotland and Wales, was needed, a Muslim think-tank said.

Photo gratuitously borrowed from, here...
Posted by Tancred at 11:40 PM

Email ThisBlogThis!Share to TwitterShare to FacebookShare to Pinterest
Labels: Islam, Religion of Peace