What Distinguishes You From Helmut Schüller, Lord Bishop? 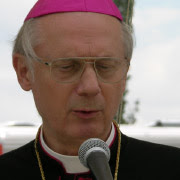 Humbug: "There is no right to any kind of "disobedience", but if one believes that the Church doesn't want blind obedience, there is but an act with solidarity in the midst of wide fields of pastoral possibilities."

(kreuz.net) "I refuse to use the polemical word "disobedience" when it comes to discussing the Pastors' Initiative."

Bishop Egon Kapellari of Graz said this on the 7th of September for the Austrian anti-Church news 'Standard'.

Msgr Kapellari appealed that the whole Church should be viewed thus: "The global Church is anything but at rest."

He bent the ear of the anti-Church magazine: "We would be pleased-- especially when it comes to the media -- 'if the successes received more attention."

Because: "A Church, that is presented as weaker than She is, can not help society any better."

Church schools, kindergartens and hospitals are more sought after than ever before.

But: "The Song of Songs of displeasure is sung in the Church and society."

There is enough cause for tears, but not so much reason to complain.

"We accept the indissolubility of a sacramental marriage without a doubt" -- explained the Bishop.

Yet at the same time he let loose the following antithesis: "One must proceed with sympathy and sensitivity with the various biographies of remarried divorced."

One may not simply reject someone at the "communion rail", but rather should talk to them individually, in order to heal their wounds.

The 'Standard' did not let themselves be impressed by the Bishop's pastoral drivel:

"But if you know that there are remarried divorced in your diocese receiving Communion, as Bishop, you have to intervene, no?"

Msgr. Kapellari coiled himself up: He has had many discussions with those affected by separation and always seeks them out, to help them, "with boundaries for life and otherwise to learn that they are not strangers in their Church."

Here the Episcopal chat hit a wall: "What do you make of Helmet Schüller. Are you also "disobedient", if you don't undertake this?" -- asked the newspaper.

Again, Msgr Kapellari turned a pirouette: "There is no right to any kind of "disobedience", but if one believes that the Church doesn't want blind obedience, there is an act with solidarity in the midst of wide fields of pastoral possibilities."

The 'Standard' offered in return that the Faith then gets undermined by "substantial leeway".

"I won't let myself be locked down"

At the intimation that the media sponsored "Pastors' Intiative" will have foreseeable and longstanding structural consequences, he let the cat out of the sack:

"I won't generally say for sure, if anyone has been led to be counterproductive, that one should, as it is said, be thrown out of the community.

He repeated himself: "I won't let myself be locked down, as to how far Pastor Schüller may go."

He would like "to keep everyone in the boat".

He would like to invite, "that no one should be boring into the hull of the ship, but pay more attention to the wind in the sails."

The 'Standard" tried to play up the Mini-Pastors' Initiative: "Umpteen priests have signed the Call already."

Msgr Kapellari countered: "The Call only consists of a Board of Directors."

And took it back in the same moment: "But I wouldn't say it was not small."

For still: "But I would like to put it all in perspective, but not with Tricks."

"IN every society there are weighty norms, which one may not allow to creep in. There are, however, also very humanly engaging enjoyments, if it so happens, to be able to translate the limiting horizon to the praxis of those affected."

I believe the translation must have been garbled.

Let me supply the remedy:

The immediate above translation suffers from the notable defect that it makes more sense than the original, but this cannot be helped.

May God help us.

This man is a Cardinal!

He's not a Cardinal, thank goodness.

Missed some stuff in translation, here's the revision:

Hmm. That makes almost as much sense as 95% of Karl Rahner.

Thanks for the very noticeable improvement!

He's just saying that some people are too hung up on rules, man.