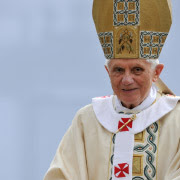 Madame Comrade supports the dim Pope-hate delegates, who plan on staying away for Pope Benedict XVI's speech in the Bundestag.

She said this for the newspaper 'Berliner Morgenpost'.

The paper belongs to the media concern of 'Axel Springer AG' with a yearly income of 2.9 Billion Euro.

They think decadence is reality

With a glance at themes like feminist-ideology and state preferences for the homosexually disturbed the politicians believe that it would do the Pope " a good turn" and will, "taste after coming to Berlin, what reality is in year 2011."

With "Reality 2011" Madame Comrade means the moral, religious, spiritual and social decadence in Germany. The Land belongs has the lowest number of births world wide.

In any even, the lady is going to hear the Papal address at the Bundestag.

She is happy, however, that the -- money heavy media boss inspired --- "lively debate going on".

German Cardinal Walter Brandmüller, who lives in Rome, has criticized the Pope-hate delegates for the 'Bild' -newspaper:

"The Delegates of the German Bundestag must be conscious of the effect this type of protest will have abroad" -- he admonished.

They will reinforce "the image of the ugly German" by their behavior.