Will the Diocese of Aachen be Driven to Use Force?

Many faithful have gathered themselves around these two Carmelites in Zweifall.  They won't leave the field without a battle. 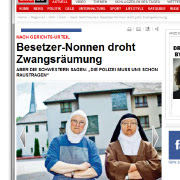 (kreuz.net) The sword of Damocles of forced expulsion hangs over the head of the two Carmelites of Zweifall.

This was reported in the German boulevard magazine 'Bild' on Monday.


Since their case has become known, Sister Regina(60) and Sister Katharina (40), have received a great sympathetic demonstration.

The Cloister which the two industrious Alsace Nunus occupy about 4.000 cubic meters has been abolished since six years ago by official Diocesan mandate.

The Diocese of Aachen would like to close the Carmel and sell it.

Actually, the Nuns don't need anyone's help. They earn their keep with their host bakery.

By a petition of the Diocese, the Aachen court has assembled an emergency board for the non-Profit association of the Carmel.

The goal: It should dissolve the association. Then the Cloister and the Land will fall to the Diocese.

The two Nuns will defend themselves with tooth and nail:

"I won't go freely", explained Sister Regina to 'Bild': "The Cops are going to have to drag me out of here."

And: "the men in the village stand behind us, will even fight with us, if it's going to get tough."

It's clear to Sister: "If we have to leave the Cloister, it will be as if Jesus had been put a second time on the Cross."

A speaker of the Diocese of Aachen is confident in the members of the Emergency Board. It has dealt with two other Carmlites from two other Cloisters:

"Both nuns in the Emergency Board will decide now, how it will proceed -- and what will be the fate of the two Nuns in Zweifall."